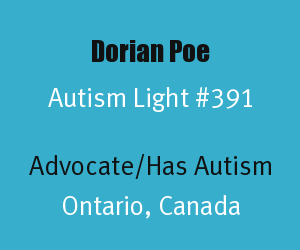 Dorian Poe is an 11 year old boy who has autism. He lives in Burlington, Ontario in Canada. Burlington is part of the Greater Toronto Area. Dorian Poe is an Autism Light for the way in which he raises autism awareness through his beloved Webkinz Polar Bear Tikko™.

According to his blog at tikko.ca, "Dorian loves Pokemon, Skylanders, video games (like Minecraft), and being creative (through drawings, story-telling, and building Lego)."

Dorian started sending his beloved Webkinz Polar Bear Tikko™ into the world when he was 9 years old in January of 2013. One of Dorian's favorite sayings is, "Autism...it's okay to be different." Thus Tikko™ wears a shirt that has a puzzle piece and those words from Dorian on it.

Each bear that is sent out comes with a letter from Dorian which encourages the owner of Tikko™ to raise autism awareness through the bear. The letter says,

Hello my name is Dorian. I am 11. I have autism and so does my pet polar bear Tikko™. Tikko™ is about to go travelling on an adventure; and I need you to take care of him. My polar bear wants to raise Autism Awareness. Just call him "Tikko the Autism Bear or Tikko™.  Guess what, this guy is much more different than the other polar bears you know. Things you should look out for:

I LOVE TIKKO™.  I would love it if you can take pictures of Tikko™ while he is gone. Help Tikko™ promote AUTISM AWARENESS to the WORLD.

Over the years Tikko™ has traveled around the world. You can view all the places that Tikko™ has been to on Tikko's Website. There are about 20 Tikko™ bears in circulation either traveling around the world or serving as a companion to one of the Ambassadors for Autism at Tikko Travels.

The following is a video of when Tikko™ went skydiving in Toronto.


The dream of Tikko Travels is to have special Ambassadors for Autism in countries all over the world who are committed to the campaign. They would loan out their bears for trips. There are already 9 people who are continuing to promote Tikko™ beyond taking him on vacation. They have received a special certificate as a Ambassador for Autism. There is currently a "Help Tikko™ Travel" Kick Starter Campaign to raise $10,000 to help toward accomplishing this dream.

Alessia Cohle's Song Make a Change: One of the special Ambassadors for Tikko Travels is Alessia Cohle. Dorian's dream inspired her and her partner Brian Donkers to write the song Make a Change (The Tikko Song). Christine Poe told Autism Light, "We feel it would make a wonderful Autism Anthem! It is inspiring! Alessia’s love for Tikko and families with autism make her a superstar in our eyes! Our dream is to see Alessia sing this song at the Toronto Blue Jay Autism Speaks “Autism Awareness” game in 2016!”

Quote from Dorian: Dorian shared these words with Autism Light that give a glimpse into the world of autism. 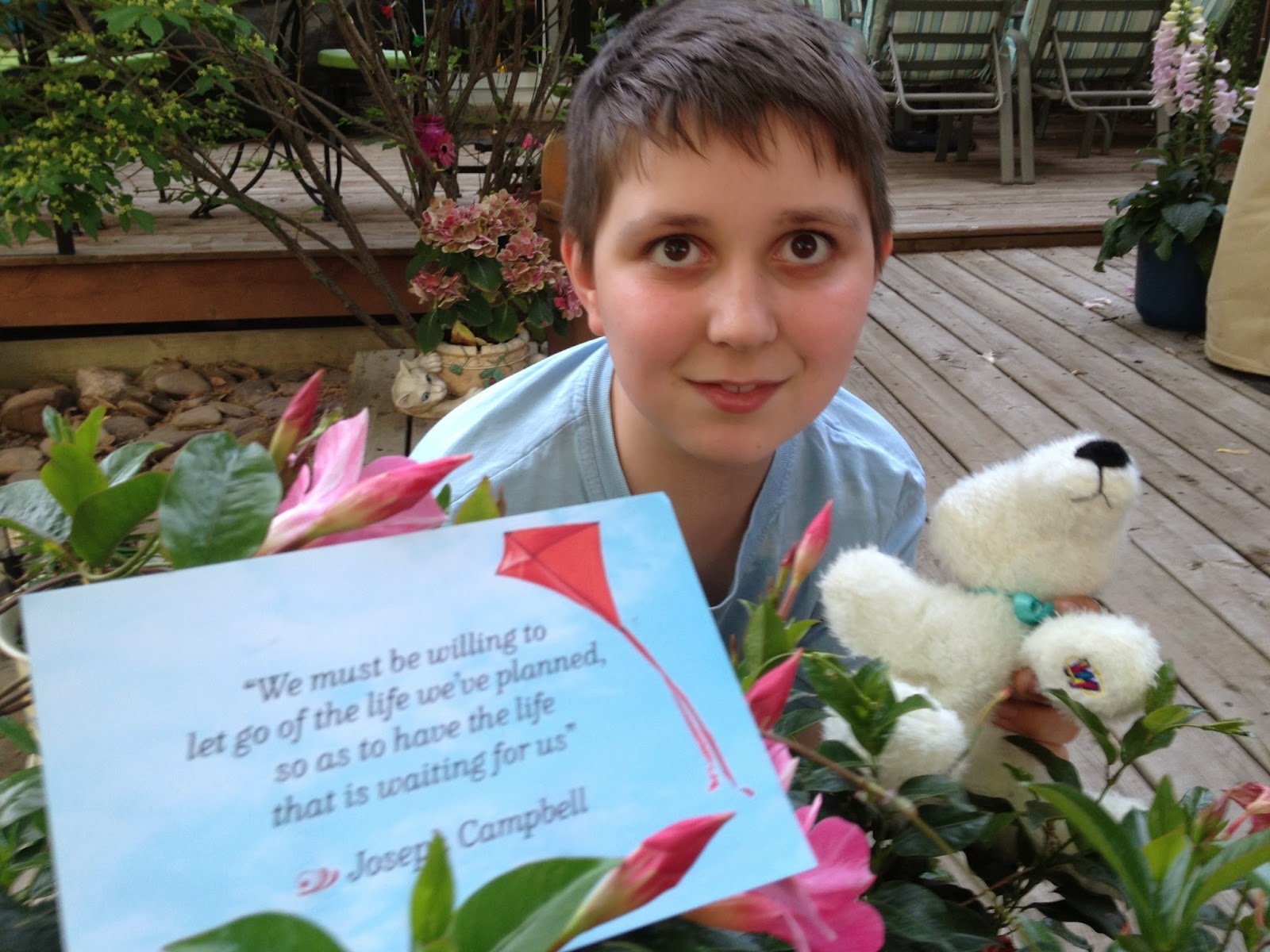 Life with autism is hard. Controlling emotions is difficult. We don't always know when people are joking. Sometimes we ask the same question over and over again and drive people crazy. We go on and on about something even when people tell us to stop. But we have really special gifts too; like being great at writing, singing, very creative, good at sports, very imaginative, very smart, and we all work as a team (Dorian Poe)


Social Media: You can follow Dorian Poe and the travels of Tikko™ on the following social media areas.
Dorian Poe attends a private school, because it has helped him with his education more than a public school could. From 2009-2012 he attended Woodview Learning Academy. Since 2012, Dorian has attended Missing Links Academy. You can donate online toward his family's ongoing tuition costs. 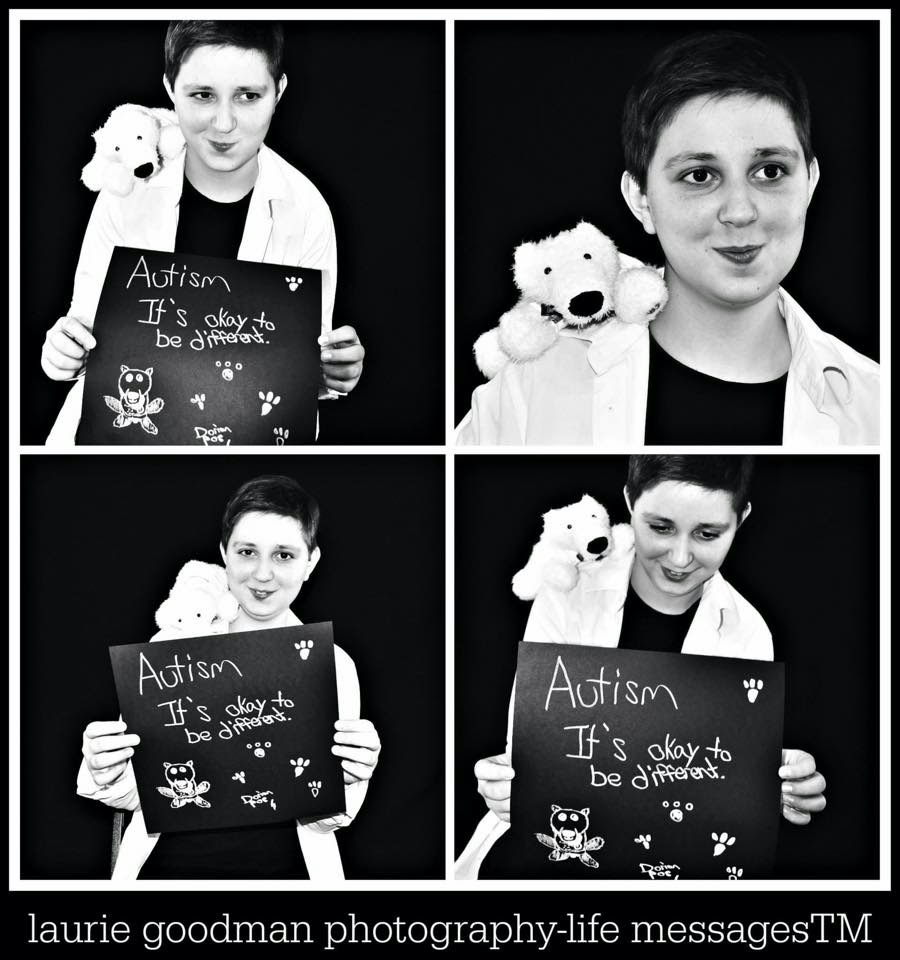 Behind many exceptional individuals with autism there is a parent, so we want to pay a huge tribute to the valuable role that Dorian's mother Christine Poe has had in helping her son fulfill his dream's for autism awareness around the world through Tikko™. It is a blessing that Dorian has such an engaging mother who cares so much to help him carry out the business of maintaining the Tikko Travels initiative.

Photos: The photos of Dorian Poe was used with permission of his mother Christine Poe.

Email ThisBlogThis!Share to TwitterShare to FacebookShare to Pinterest
Labels: Autism, Canada, Has Autism