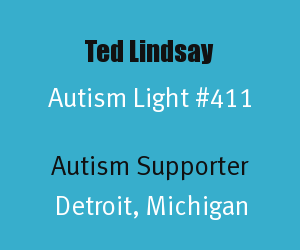 Ted Lindsay was born on July 29, 1925, in Renfrow, Ontario in Canada. He lives in Oakland, Michigan near Detroit. Ted Lindsay had a hall of fame career in the National Hockey League playing for the Detroit Red Wings and Chicago Blackhawks. Ted Lindsay is an Autism Light because he established the Ted Lindsay Foundation and has been shining a light on finding a cure for autism since 2001.

NHL Career: Ted Lindsay scored 851 points in his hockey career from 1944-1965. He played Left Wing for the Detroit Red Wings and the Chicago Blackhawks. His nickname as a player was Terrible Ted, because of his aggressive style of play. Ted Lindsay was inducted into the National Hockey Hall of Fame in 1966. His illustrious career included winning the Stanley Cup four times and he was the first player to skate around the rink with the Stanley Cup hoisted over his head after his Detroit Red Wings team won the championship.This started a tradition that has been continued to this day.

The following documentary celebrates the accomplishments of Ted Lindsay as a Legend of Hockey.

Hockey Players Union: Lindsay is also known for playing a key role in helping the Hockey players organize a players association, an action that resulted in the Detroit Red Wings trading him to the last place Chicago Blackhawks in 1957. The 1995 movie Net Worth was about Lindsay's role in this historical step for the NHL.

Ted Lindsay does not have relatives with autism, but back in 2001 his physical therapist at the time had a 4 year old with autism. "Ted took on this cause at 76 years-old after finding out the son of a close friend had autism. Ted tells everyone until then he never heard about autism and didn't know how debilitating it is to children (Detroithub, February 25, 2013)."

Here is a video of Ted Lindsay at his 12th Annual Celebrity Golf Outing to raise money for autism in 2013.

The following is a video of some of the work the Ted Lindsay Hope Center will be doing for families.

Todd Lang, an autism father, said that The Ted Lindsay Foundation, "is one of the foundations that really makes a difference, where the results are tangible. Mr. Lindsay's passion for creating awareness, to making people understand not only what autism is but what resources are available, is important (Livingston Daily, February 8, 2015)."

Wikipedia: You can learn more about Ted Lindsay at his Wikipedia Page.

Special thanks to Ted Lindsay for being an Autism Light. The efforts he has made to raise funds to support autism are shining a light in many areas of autism in Michigan. Never estimate what one man can do who wants to make a difference.

Photo: The photo of Ted Lindsay was from the Creative Commons of Wikipedia.
Posted by Alan Stokes at 10:33 AM