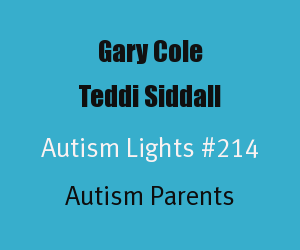 Gary Cole has performed dozens of roles in both television shows and movies, including the movie Office Space and the HBO television show Entourage. Teddi Siddall is an actress, who has appeared in several television shows such as Grey's Anatomy and Happy Days. She put her career on the back burner in 1998 in order to have more time to give to her daughter Mary who has autism.

Support for Autism Causes: The Gary Cole Archives website says, "Gary's teenage daughter has autism, and he's particularly interested in autism charities, for which he has done a great deal of work(Source)." Two autism causes Gary Cole supports are The Help Group and Autism Speaks (Source).

Here is a Public Service Announcement that Gary Cole produced for The Help Group, an organization that runs multiple autism schools in the Los Angeles area. Gary and Teddi's daughter Mary attended a program run by The Help Group when she was in high school.

Autism Awards: In April, 2012, Gary Cole was honored at an autism awareness gala in Northville, Michigan that was sponsored by Celebrities Against Autism.  More information on this event can be found at an article at the Northville Patch.

WebMD Interview: In February, 2009, Gary Cole shared about his daughter's autism and his autism advocacy in an interview with WebMD.  The WebMD article was written by Lauren Paige Kennedy.

Other Information: You can read more information on Gary Cole and Teddi Siddall at the following websites.

Special thanks to Gary Cole and Teddi Siddall for raising awareness for autism, even as they make their daughter Mary their priority. They are Autism Lights in Los Angeles and around the world with their visible advocacy for autism.

Autism Light honors diverse heroes to the world of autism.
Posted by Alan Stokes at 2:08 PM