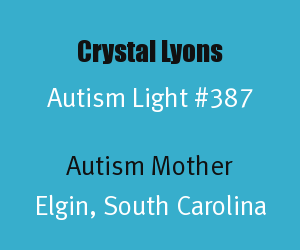 Crystal Lyons taught herself to sew to be able to make a weighted vest for her son John to cope better with his autism. Military uniforms were used because Crystal's husband is a drill sergeant in the U.S. Army and they had some old vests in the garage. The vests are weighted with pennies. Lyons described the positive impact of the vest on her son in this way, "He needs something to help him calm down; he needs to feel pressure. They call it a portable hug. He is absolutely calmer. He is more focused, he's able to concentrate (Today, A. Pawloski, April 9, 2015)."

After seeing how it helped her son, she started Vests for Visionaries in July 2014 and the charity was incorporated in September 2014.  The name "visionaries" describes children with autism because Crystal Lyons says, "These children see things that I would never see (Today, A. Pawloski, April 9, 2015)."

Crystal Lyons told The Huffington Post that her goal in creating Vests for Visionaries was to "help children and families be able to have access to a therapy tool they may not be able to afford and to give hope to those families in a situation where they may already be feeing helpess. I just want people to know not to give up after diagnosis and to know there is help and there are people willing to help if you just let them know (The Huffington Post, Caroline Bologna, April 10, 2015)."

Vests for Visionaries makes weighted vests from military uniforms and gives them free to families with children with autism. Their charity is able to help so many because of he generosity of others, including service members who donate their old uniforms. The following accomplishments by Vests for Visionaries in less than a year of existence are remarkable.


Since last summer (in 2014), Lyons has created 135 vests, repurposing hundreds of old military uniforms that have been donated to her charity. Requests have come in from 25 states and as far away as Australia. Lyon sews the garments for free, with shipping often covered by donations (Today, A. Pawloski, April 9, 2015).

Crystal Lyons gave this word of encouragement for autism parents to Autism Light.

Stay Strong. Be the best advocate you can be. Don't give up hope (Crystal Lyons).

Social Media: You can follow Vests for Visionaries on the following social media pages.


Contacting Vest for Visionaries: You can contact Vest for Visionaries to donate to the charity or to request a free vest. There could be as much as a six month wait for a vest because of the increased demand brought on by media exposure of Crystal Lyons' work.  Here is her contact information.


Special thanks to Crystal Lyons for being an Autism Light. Her efforts to brighten the life of people with autism by creating weighted vests are a blessing to many in the autism community. We wish Crystal Lyons all the best in the future in her role as an autism mother and in the charitable work at Vests for Visionaries.