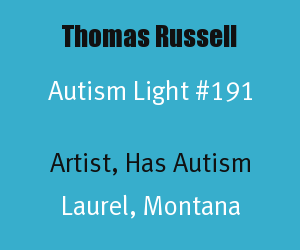 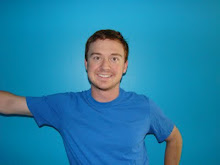 Thomas Russell is from Laurel, Montana. He is a 23 year old artist who has autism. When asked what it is like living with autism, Thomas replied, "It's not that different than living everyday normal life (Source)."  Thomas Russell is an Autism Light for his excellence as an artist with autism.

Thomas Russell graduated from Laurell High School. He is the son of Charles and Brenda Russell. He works in his family lawn care business and part-time at Subway. However, his true love and gift lies in being an artist.

Here is a sample of one of the amazing pieces of artwork that Thomas Russell did. This portrayal of the Autism Awareness ribbon will be sold to raise support for autism awareness and will continue to raise awareness when it is displayed by the eventual owner. It will also be added to the Autism Light Art Page. 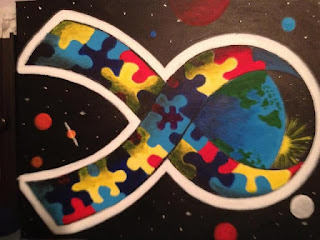 Thomas Russell gave this advice to kids with autism, "Don't let anyone stop you from following your dreams."

Thomas Russell is very blessed to have his siblings Alex and Tara Russell and Anna Meadows in his life. Thomas's life motivated his sister Anna Meadows to become a special education teacher and she currently works with elementary students. Anna Meadows did a video project called "The Heart of Autism" for one her graduate classes on her brother's life that can be viewed on this link of his Facebook page.

Perhaps the best way to understand someone is to ask their mother. Thomas' mother Brenda Russell said, "Thomas is one of the coolest people I've ever met. He has an awareness--almost like an extra sense. He's the most compassionate kid I know. He will do whatever he can to help anybody (Source)."

To view Thomas Russell's work online you can visit his website at www.thomasrussell000.blogspot.com or his Facebook page. There was also an article done recently by The Laurel Outlook about his work called Living with Autism.

Special thanks to Thomas Russell for being an Autism Light. He truly has a gift to communicate through his art. We expect to hear great things in the future about his artwork.


Photo: The photos in this post were used with permission of Thomas Russell and his sister Anna Meadows.