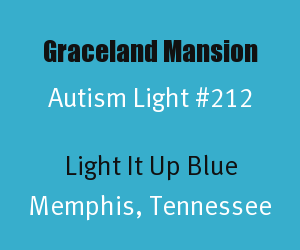 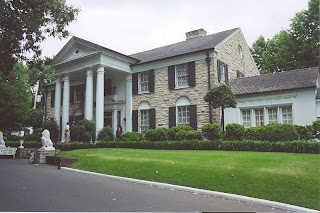 Graceland Mansion was the home of the late Elvis Presley from 1957-1977.  Graceland became a National Historic Landmark on March 27, 2006 and is located in Memphis, Tennessee. Graceland Mansion is an Autism Light for their participation in the Autism Speaks Light It Up Blue Campaign for Autism Awareness in April.

Wikipedia describes Graceland as "a large white-columned mansion and 13.8-acre (5.6 ha) estate that was home to Elvis Presley in Memphis, Tennessee. It is located at 3764 Elvis Presley Boulevard in the vast Whitehaven community about 9 miles (14.5 km) from Downtown and less than four miles (6 km) north of the Mississippi border. It currently serves as a museum. It was opened to the public on June 7, 1982 (Source)."  It is the second most popular private residence in the United States for tours behind the White House. You can learn more about Graceland through their Wikipedia Page.

Email ThisBlogThis!Share to TwitterShare to FacebookShare to Pinterest
Labels: Autism, Landmark, Light It Up Blue, Tennessee