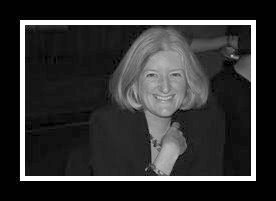 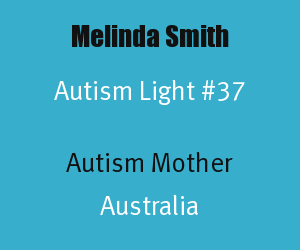 Melinda describes her diverse life this way on her website, "I have been at various times a Ph.D. student in Japanese History, a teacher of English as a Second Language, a lawyer, a tea maiden, a tour guide, a barmaid, a software salesperson, a legal editor and a law teacher (Source)."

Autism Light asked Melinda Smith about her favorite autism related poem from her site, and she directed us to the one called "First...Then...". In a prelude to this poem Melinda Smith writes:


"If you have people in your family or circle of friends who still don't get why you've been acting so weird since your child with difficulties was born, make them read this."

It wouldn't do it justice to quote a line from the poem here, because one needs to read the full poem to understand its deep meaning, so I encourage you to read it at her CircleQuirk Website. She is truly an inspirational poet.

Melinda Smith published her book of autism poems with Ginninderra Press in April, 2012. The actual book launch is taking place at events during the week of April 9, 2012. The book is a short collection of 24 of Melinda's autism poems and is named after her favorite poem First...Then... The poems reflect on people with all types of different relationships to autism such as parents or siblings, and also notes the perspective of both non-verbal and verbal individuals with autism. You may find information for purchasing her book at a section of her website dedicated to this book. Autism Light congratulates Melinda Smith on the release of this book of autism poems.


Melinda Smith's poem "Autistic Acrostic" was featured on Dr.Tony Attwood's Website. The poem reflects on a parents experience of facing a meltdown from their child. The first letter of each line spells an acrostic of a very important word. The poem goes like this.

Any day now, it will lift.

Under your mask of howls, I see

Incensed that I should try to shift

Some blame, for this, our hell, to you.

For more information on Melinda Smith's poetry and work you may check out the following Websites.

Special thanks to Melinda Smith for being a poet that touches on themes that relate to the autism community.  Your poetry is a light that is bringing autism awareness through poetry.


Photo: Photo in this post used with permission of Melinda Smith.