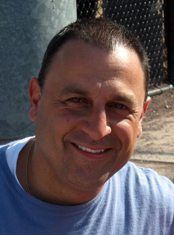 Frank Nappi is a high school English teacher in Long Island, New York in the Oceanside School District. Frank Nappi is also an author who has written a unique fictional series where the main character is a baseball player who has Aspergers. Frank Nappi is an Autism Light because of the increased awareness of autism that will come from his fiction writing and a current movie based on the first book in the series.

Author: Frank Nappi has written several fictional books. To order his books or find out more details on each book go to the book section of his website. His most recent writing is a unique sports fiction series where the main character is a fantastic pitcher who has Aspergers. The series includes The Legend of Mickey Tussler with the sequel Sophomore Campaign scheduled to be released in April, 2012. In addition, there is a third book in this series that Frank Nappi is in the process of writing.


Reviews: The following are some positive reviews that have been written about this series.
Movie:  Here is the trailer for the movie, "A Mile in His Shoes", which is based on Frank Nappi's book The Legend of Mickey Tussler.  The movie will feature a main character with Aspergers. This movie premiered on GMC TV on Sunday, September 25, 2011 at 7pm and 9pm and is currently available for rental in video stores.


People who like sports fiction and also have an interest in characters with autism will fall in love with Frank Nappi's series.  The author's new offerings are anticipated with excitement by readers of the series.

Social Media:  You can follow Frank Nappi at the following social media or Websites.
Autism Light honors diverse heroes to the world of autism.


Photo: Photo in this post used with permission of Frank Nappi.