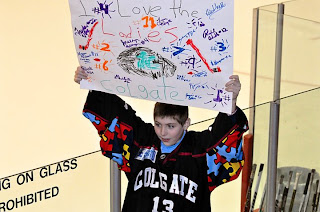 11 year old Christian Mast is from Upstate New York. Christian has autism and he spreads light to the autism community by being an author, fundraiser, and autism advocate. Christian also is an autism sibling as his brother Carter has autism. Christian Mast is an Autism Light because he is making a practical difference in his community by being an autism advocate, partnering with causes such as the Colgate Women's Ice Hockey Team's Autism Awareness project. In addition, he is a fundraiser who is currently working on a project to benefit Autism Speaks.

Colgate Women's Ice Hockey Team: Christian enjoys both playing hockey himself and watching great hockey. He is a super fan of the Colgate Women's Ice Hockey Team and helped designed the uniforms they will wear to kickoff their 2nd Annual Autism Awareness project the first weekend of February, 2012. Head Coach Scott Wiley said this about Christian:


Christian has become a part of the Colgate women's hockey family over the past year. He is an extremely talented, caring and inspiring individual and we are excited to give him an opportunity to show his creativity through designing this year's autism awareness jersey (Source).

For more information on the the hockey team visit their Autism Light post about their being designated Autism Lights #80. A news story on Christian Mast was written by Colgate University and a video of Christian talking about designing uniforms for the project is included here.


Fundraising for Autism Dog: Christian Mast seems to have a special gift for creative fundraising. A past fundraising venture came in 2009 when Christian authored a 24 page children's book called "Attack of the Killer Dinosaur Frogs", which helped raise some of the money needed for his family's acquisition of a Four Paws For Ability Dog, a Golden Retriever named Jetta. Christian's brother Carter also has autism.

Fundraising for Autism Speaks: Christian is actively involved in fundraising for his local chapter of Autism Speaks, including a walk for autism, selling toys, and running a lemonade stand. He is currently working on a goal of selling puzzle pieces to raise $1 Million dollars for Autism Speaks. He has created a Facebook page called "A Million Pieces for Autism" to help spread the word about his project and also to raise awareness for autism. He has over 500 likes of the Facebook page as of January 30, 2012. 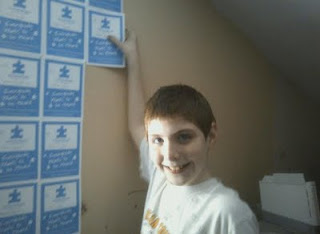 The project is gaining energy. Jeanne Sager wrote an article on Christian Mast at The Stir of Cafemom.com.   Also, the blog Developmental Disabilities in the News featured a post on how through this fundraising Christian is forming social relationships and breaking myths about how people with autism are supposed to act. If everyone who hears of this will give just $1.00, $1 million can be secured as the porject goes "viral" through the widespread reach of social media like Facebook and blogs on the Internet.

Want to support Christian's cause?
Make checks out to Autism Speaks and send to:
Autism Speaks
10 Orchard Terrace
Sodus, NY  14551.

Donations can also be made via Paypal under the email address mommyofautism@gmail.com. All it takes is $1 to purchase a puzzle piece!  Autism Light made a donation and decided the fastest way to donate was through Paypal. You can follow Christian's fundraising progress at anytime by viewing his Autism Speaks Donation Page.

Special thanks to Christian Mast for being an Autism Light! His efforts are an inspiration to the autism community. Something tells us this Autism Light is just beginning to make a big mark for the cause of autism.

Photo: Photo in this post used with permission of Erin Mast.
Posted by Alan Stokes at 7:06 AM