Curtis Maybin is a software developer and senior systems analyst for QLogic Corporation. He lives in Mission Viejo, California and is the father of two children who have autism. Curtis Maybin is an Autism Light because besides being an autism parent, he is responsible for Autism News Wire--one of the top autism news websites on the Internet.

Curtis Maybin is the founder and editor of the Autism News Wire. The mission of the site is to foster global awareness about autism. The Autism News Wire has special sections on Gluten Free, Research, IPad, and various geographical locations around the world. Curtis told me that he has about 2,000 people getting his weekly newsletter and Autism News Wire gets about 5,000 unique hits each month originating from 77 different countries.

Curtis Maybin's role as a father of sons with autism has motivated him to do what he does through his Website. He told me that he started his Autism News Wire website two years ago as he was considering how to help his son, who has autism, and who is now 8 years old.  A practical resource that Curtis Maybin recommends for parents is called Parenting Journals. Here is a picture of his two sons. 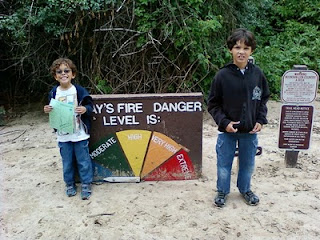 I asked Curtis Maybin what he considered the top news stories he has found across his wire and this is what he provided along with the links to read them.

Connor Musk was designated an Autism Light on August 3, 2011, based on the amazing news story above that Curtis Maybin referenced.

Thank you Curtis Maybin for being an Autism Light. Your dissemination of diverse news on autism is making a difference in educating and motivating the the autism community, including our global family of parents, grandparents, siblings, autistic individuals, professionals, and all those interested in autism.

Photo: Photos in this post used with permission of Curtis Maybin.

This Autism Light post went into syndication on Autisable.
Posted by Alan Stokes at 7:09 AM