Autism Light #306 is Spike the Lizard. 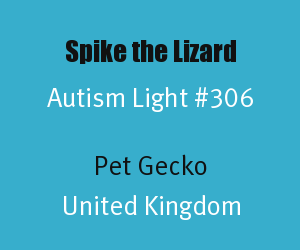 Spike is a pet gecko who lives in Hurdsfield in Chesire County, England. He is the pet of a 10 year old boy with Asperger's named Callum Lake. Spike is an Autism Light because of how his presence has transformed Callum Lake's life.

Callum's family gave him Spike after he asked for a pet lizard. Callum and Spike have formed a special bond. In fact, Karen Beech, Callum's mother, said "As soon as he held him, he fell in love (Read More at the Autism News Article on Spike the Lizard)."

Callum said this about Spike: "Looking after Spike is really fun. I've started getting up really early in the mornings so I can sit and eat my breakfast with him before school (Read More at the News Article by the Express on Spike the Lizard)."

Karen Beech is elated with the growth that Spike is inspiring in he son's life. She said, "Spike may be small, but he has had a huge impact on Callum's life and it's heart-warming to see him so much more confident and independent with family and at home (Read More at the Article at the Macclessfield Express on Spike the Lizard)."

Here are some articles written on Spike and how he is improving the life of Callum Lake.
Special thanks to Spike for being an Autism Light to Callum Lake. Spike becomes the first Lizard to be named an Autism Light. He is yet another example of how diverse animals can have therapeutic value to some children with autism.

Autism Light honors diverse heroes to the world of autism.
Posted by Alan Stokes at 5:32 AM