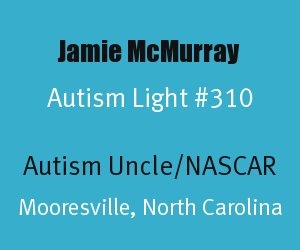 Jamie McMurray is a NASCAR Driver and has a niece who has autism. He who won both the Daytona 500 and Brickyard 400 in 2010. Jamie McMurray was born on June 3, 1976, in Joplin, Missouri and lives in Mooresville, North Carolina today. For over 5 years Jamie McMurray has been promoting autism awareness through his position in NASCAR. Jamie McMurray is an Autism Light for being an autism uncle and for raising awareness and funds for autism for over a decade as a successful NASCAR driver.

The following is a Public Service Announcement by Autism Speaks and the Ad Council that featured Jamie McMurray.

The Jamie McMurray Foundation (JMF) promotes awareness of, and raises funding for, the research, education, and support of inviduals and families afflicted with autism. JMF is dedicated to bringing the financial backing and support of the NASCAR community, together with the passion and commitment of the autism community, to promote better understanding of this challenging disability (Read More at the Jamie McMurray Foundation's Website).


Autism Light honors diverse heroes to the world of autism.
Posted by Alan Stokes at 8:07 PM