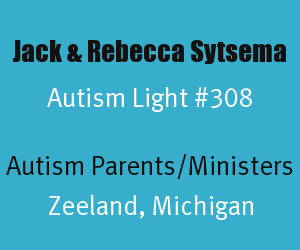 Jack and Rebecca Sytsema are ordained Christian ministers who live in Zeeland, Michigan. They have 3 sons and their two oldest (Nicholas and Samuel) have autism. Their youngest son Trey is developing typically. Autism Light first became acquainted with the Sytsema's ministry in December, 2011, when learning of the tremendous impact their ministry called Children of Destiny had made on Julia Boyd, Autism Light #114. Jack and Rebecca Sytsema are Autism Lights because of how their ministry encourages the faith of autism parents and gives them daily hope and encouragement.

The Children of Destiny website lists this description of how Jack and Rebecca Sytsema approach their life with autism:


We first became interested in autism when our then 2-year-old son, Nicholas, was showing signs of developmental delay coupled with intestinal difficulties in mid 2000. In January, 2001, he was diagnosed with autism. We believe in the power of prayer and believe that God’s hand is firmly on Nicholas’ life. We have implemented several other interventions for Nicholas, including the gluten- and casein-free diet, several biomedical interventions, and an intensive program of Applied Behavior Analysis.

While each intervention has helped Nicholas come to new levels of success, we firmly hold to the belief that the most powerful intervention we have brought into our son’s life has been to give him over to God and Him to order our steps concerning Nicholas. Although the path has been a difficult one, we have seen steady progress as God works new miracles day by day. God has yet to disappoint us in any area with which we have fully trusted Him (Read More at the About Us Section of the Children of Destiny Website)!


Jack Sytsema:  Jack Sytsema is currently the Executive Vice President of Finance for the International Child Development Resource Center (ICDRC) and Creation's Own (CO). The ICDRC is non-profit organization founded by Dr. J. Jeff Bradstreet in order to foster treatment, education, and research to cure autism. Jack Sytsema received his Bachelor's Degree from Calvin College and his Master of Divinity from Fuller Theological Seminary.

Children of Destiny: Children of Destiny is a faith based ministry that has been in operation for the past 11 years. Their website says they are Defeating Autism in the Name of Jesus. Their mission is as follows:


Children of Destiny is a Christian ministry dedicated to bringing God's hope, life, and restoration to families and individuals struggling with autism and related disorders through the development and promotion of effective prayer, inspirational messages, and spiritual support (Read More at the Introduction of the Children of Destiny Website).

Social Media: You can follow Children of Destiny at the following social media areas:
Special thanks to Jack and Rebecca Sytsema for being Autism Lights. Their ministry of encouraging prayer in and for the autism community is a shining light for those that receive help from their Christian faith to cope with autism everyday. Christian autism families and churches are blessed to have these faith-based autism resources available from Children of Destiny. We wish Jack and Rebecca Sytsema all the best in their ministry and in serving as autism parents to two boys with autism.

Autism Light honors diverse heroes to the world of autism.
Posted by Alan Stokes at 9:30 AM