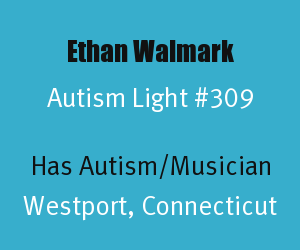 Ethan Walmark is an 8 year old boy from Westport, Connecticut, who was diagnosed with autism at age 2. His parents call him their "perfectly imperfect son". Ethan has gained national attention for the amazing talent he has at playing the piano. Ethan Walmark is an Autism Light for his demonstration of the extraordinary musical talent that springs forth from someone with autism, and for how that gift is blessing others.

Thousands from both in and outside the autism community were introduced to Ethan Walmark when a video made of him playing Billy Joel's Piano Man went viral on April 25, 2012. Here is an Autism Speaks video of Ethan Walmark performing that same piece at an Autism Speaks to Wall Street: 6th Annual Celebrity Chef Gala in New York City on October 9, 2012.

Praise from Billy Joel: Billy Joel has commented on Ethan Walmark's talented use of his music saying, "I think I like his intro to 'Piano Man' better than mine. And this kid plays with a lot more energy than me. Maybe he could teach me a few things  (Read the Billy Joel Quote in the Washington Post)."

Light It Up Blue 2013: Ethan Walmark joined Autism Ambassador Yoko Ono on April 2, 2013, to turn the switch to light up the Empire State Building to start Autism Awareness Month in 2013 (Read More about Light It Up Blue at the She Knows Website).

Fundraisers: Ethan has been scheduled to play at at a variety of fundraisers across the country. On August 8, 2013, he peformed at the Cabinets Furniture & More's fundraiser in Hershey, Pennsylvania benefiting Autism Speaks (Read More at an Article on Ethan Walmark at the Penn Live Website).


Autism Light honors diverse heroes to the world of autism.
Posted by Alan Stokes at 8:11 AM