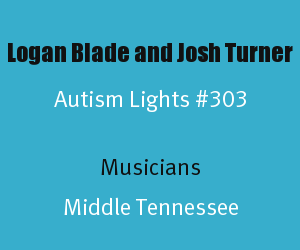 ﻿
Logan Blade is a young man with autism from Columbia, Tennessee. Josh Turner is a country music singer from Nashville. Logan Blade and Josh Turner are being named Autism Lights on the same day because of the relationship their two stories have with each other. Logan Blade is inspiring others with his musical talent that breaks through the typical limitations of his autism. Josh Turner is one of Logan Blade's favorite singers, and the country star made a tremendous difference in the life of this musician with autism, when the two met and sang together for a song at the Grand Ole Opry on Tuesday, May 28, 2013.

Although he is chiefly nonverbal outside of the realm of music, Logan Blade currently sings publically at a variety of venues with a packed schedule. Christine Seiber at The Columbia Herald did a news feature on Logan's amazing talent in March of 2013.

Here is a special report from Stacy McCloud of FoxNashville on Logan Blade's life of being diagnosed with autism to how he currently has an amazing gift for music.

Logan Blade Fitting In: Logan Blade's debut album was Fitting In (2012). He sings a few Josh Turner songs as well as some of his own in this album. You can purchase that album at CDBaby or ITunes.
Social Media for Logan Blade: You can follow Logan Blade at the following social media areas:
Josh Turner/Punching Bag: Josh Turner is currently on tour and his latest album is called Punching Bag (2012). For information on purchasing Josh Turner's music or hearing him on tour visit his website at www.joshturner.com.

Social Media for Josh Turner: You can follow Josh Turner on the following social media areas:


Special thanks to Logan Blade and Josh Turner for being Autism Lights. Logan Blade is an example of the amazing talent in music that some people with autism have. Josh Turner is an example of a star that has made a difference for autism by being a role model and hero to someone with autism. We wish Logan and Josh success as they continue to entertain others through their music.

Autism Light honors diverse heroes to the world of autism.
The photo of Josh Turner in this post is in the Wikipedia Commons.
Posted by Alan Stokes at 7:08 AM