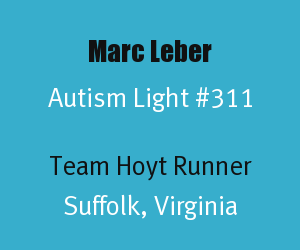 Marc Leber is from Suffolk, Virginia and is a first year student at Georgia Institute of Technology. While in high school Marc Leber competed in 16 Team Hoyt VB races with a 14 year old partner with autism named Ashton McCormick. Marc Leber is an Autism Light for making a positive difference in Ashton McCormick's life.

Marc Leber was a cross-country and track star when he was in high school at Nansemond-Suffolk Academy. Marc holds several long-distance records at his high school. You can see the record of his high school track career at Marc Leber's page on Athlete.net.

Here is a video highlighting Marc Leber and Ashton McCormick's relationship that they have forged through Team Hoyt races.

"Ashton loves being in the water," said Marc Leber. "So I kind of take it as a responsibility to make him happy. That's kind of why I run. I put myself through a lot of physical pain to give him that feeling, to make him feel like he is really number one in the world, like he is in first place, like he is an Olympic marathon runner every single time (From Above YouTube Video)."

"Something clicked between the two of them," Ashton's mother Jen McCormick said. "I'm not quite sure how to describe it. Ashton needed a friend, and he found someone who understands him and just lets him be who he is (Quoted in The Virginian Pilot, Star Runner Autistic Boy Form Unexpected Friendship, August 26, 2013)."

Social Media: You can follow Marc Leber on the following social media areas:
Special thanks to Marc Leber for being an Autism Light. It is truly amazing to see how friendships between neuro-typical individuals and those with autism can enrich the lives of all of those concerned.  We wish Marc Leber all the best in college and life.

Autism Light honors diverse heroes to the world of autism.
Posted by Alan Stokes at 4:02 PM