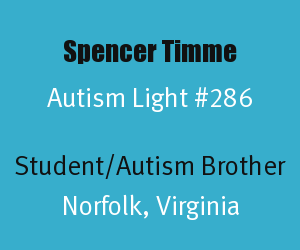 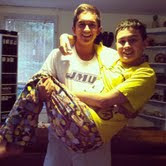 The following is a video that Spencer Timme developed about "What it's like to have a Brother with Autism". The video has had over 122,000 views as of today and it was featured on the Most Watched Today Website. In the description of the video, Spencer Timme wrote, "A short video I made about what is like to have an older brother with autism. I hope you enjoy it and see how blessed I am to have Mitchel as my brother. I love him to death and I want everyone to see how awesome our bond is!"


In the above video, Spencer Timme says about his brother Mitchel. "Our relationship is special. Not one person understands him the way I do. Our bond is strong. He is the most important person to me. I'll always protect him. He is my brother."

Student: Spencer Timme is a student at James Madison University in Norfolk, Virginia. He is a majoring in International Marketing/Business Spanish and is scheduled to graduate in 2014.  While in school he is working as a Product Tester for Nike and he is serving as a Marketing Intern at Hampton Roads Piranhas.

Advice to Other Autism Siblings: Spencer Timme provided this advice via Autism Light to pass on to other autism siblings about improving their relationship with their autistic brother or sister.

Some advice I have is for the siblings to have patience with their autistic sibling. I can tell right away when my brother feels any sort of anxiety and I try my best to never rush him with anything and let him do things at his pace. Another huge bit of advice is just to make your presence known around your sibling. Not in an authoritative way but for instance if he or she is watching TV, just hang out in the same room with them. Even though sometimes it isn't acknowledged, they know you're there. My brother and I are very comfortable around each other and I think that comes with time of just being around each other even though sometimes we are just silently doing our own activities.

You can follow Spencer Timme on the following social media areas.
Special thanks to Spencer Timme for being an Autism Light and giving the autism community a glimpse at his relationship with his brother. We look forward to hearing amazing things in the future about Spencer and Mitchel. If you wish to email Spencer Timme and share your autism stories you can contact him at timmesc@dukes.jmu.edu.

The photo in this post was used with permission of Spencer Timme.
Posted by Alan Stokes at 10:06 PM