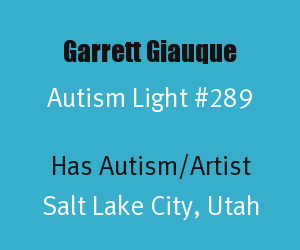 Garrett Giauque is a 13 year old boy with autism from Salt Lake City, Utah.  An amazing talent for drawing has surfaced in Garrett. Garrett Giauque is an Autism Light for the way his talent at drawing is serving as an inspiration to the autism community.

When asked to describe himself, Garrett said, "Well Garrett's a different man and Garrett's a surviving guy, surviving autistic kid. Trying to survive this life and world (Source)."

Mormon Faith and Autism: In August, 2011, Garrett's mother April, who also has two other children with autism, wrote an article called, "Garrett Was God's Child First" which appeared in the Ensign, a publication of the Mormon Church. The article is very helpful in showing how faith, in this case Garrett's mother's Mormon faith, gives a perspective on autism. April Giauque writes in the article about what she has learned from Garrett:


What I have learned from Garrett and our other children who fall within the autism spectrum is that they are children first and people with autism second. I imagine that it is much the same way that our Heavenly Father sees all of us: we are His children first, and we have trials and experiences second. Our children want love, attention, help, success, and praise. They want their pain to be eased, and they want to feel hope. They enjoy life differently than many people do, yet their needs and wants are similar to those of most everyone  (Source)."

Autism Contributes to Garrett's Artistic Ability: Garrett's mother, April said, "The ability that autism has given him in the sense of how to focus, how to look at detail, how to create things. That is going to be his gift back to the world."

Future Plans: While 13 is young to have one's future planned out, Garrett's mother foresees that he might have a career someday working in a museum and drawing animals (Source).

There is an archived news story by KSL.com-Utah by Peter Rosen on Garrett Giauque that you can read at this link.

Special thanks to Garrett Giauque for being an Autism Light. We look forward to hearing amazing things about how his talent develops in the future. For more information on artists with autism visit the Autism Light Art page.

Autism Light honors diverse heroes to the world of autism.
Posted by Alan Stokes at 7:43 AM