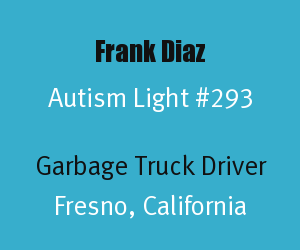 Frank Diaz is a 53 year old garbage truck driver for the City of Fresno, California. Greyson Kelly is a 4 year old boy with autism. Every Wednesday for the past two years, when Frank Diaz drove by Greyson's home on his garbage pickup route, the young boy would excitedly come out to see the big truck. Frank Diaz is an Autism Light both for how his weekly routine at work has brought joy to Greyson's life and for taking the time to show kindness by letting the boy sit in his garbage truck.

Here is a video of the news story that Brian Williams gave on the NBC Nightly News on Frank Diaz and his imapct on Greyson Kelly and his family.

Visit NBCNews.com for breaking news, world news, and news about the economy
Barbara Anderson noted in an article for the Fresno Bee, that Greyson has demonstrated growth in his communication over the years of greeting the garbage truck delivery. His first word was "truck" and recently he had a breakthrough when he uttered his first sentence, which was, "I want truck (Source)."   Chrissy Kelly says this about her autistic son's reaction when the garbage truck comes each week. "You see the way he reacts. He lights up, his entire body feels joy (Source)." Greyson's mother, Chrissy Kelly, has a blog called Life With Greyson + Parker, in which she chronicles her families journey with autism. In an entry on her blog called, people are good, Chrissy Kelly wrote a letter to Frank Diaz thanking him for showing special attention to her son Greyson and letting him sit in his truck. The article went viral and was viewed by over 10,000 people in the first few days. Here is the closing paragraph of the letter Chrissy Kelly wrote:


Sometimes I worry-How will the world treat my boys? And today was a beautiful reminder that people are good-all because of you, Frank. I saw the way your face lit up with joy that my son put there and I was so proud and so honored and so humbled to be a part of such a magical moment. Sometimes I hear phrases like People are so stupid, or crazy or mean. To them I say - No they aren't. You haven't met Frank (Source).

Special thanks to Frank Diaz for being an Autism Light. His gift of inspiration to the Kelly family shows us that someone can become an Autism Light when they least expect it, and even in the midst of doing one's daily job.