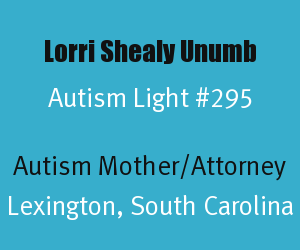 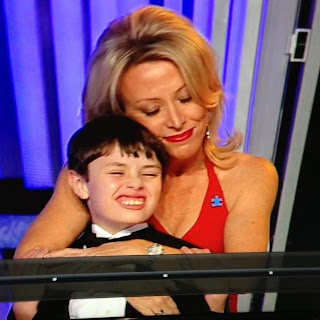 Lorri Shealy Unumb is an attorney from Lexington, South Carolina. She is also a mother of a son with autism named Ryan. She has been called "inspirational" and "passionate" by David Newton (Humanitarian Award Winner Inspiring, ESPN.Com). Lorri Shealy Unumb is an Autism Light for the multitude of ways she helps the cause of autism through her advocacy and forward vision. Besides being a mother, her autism legacy includes three major areas. She is the author of Ryan's Law, a South Carolina Autism Insurance Law; the co-founder, along with her husband Dan, of the Autism Academy of South Carolina; and the Vice-President for State Government Affairs for Autism Speaks.

The following is a news feature on Lorri Shealy Unumb's efforts to pass Ryan's Law by WBTV3 Charlotte.

The Autism Academy of South Carolina (AASC) was born out of a vision to enhance the educational options that exist for children impacted by Autism in South Carolina. After searching the country in 2009 for "best practice" educational models, the founders, Lorri and Dan Unumb, decided to make it their mission to create an alternative education option that utilized the principles of Behavior Analysis to not only provide exceptional services for learners, but to also serve as a community resource for those impacted by autism (Autism Academy of South Carolina, About Us).

The AASC has an enrollment of approximately 18 children (Humanitarian Award Winner Inspiring, ESPN.Com). A promotional video from the Autism Academy of South Carolina on YouTube explains their work (Watch Video).

Autism Speaks: Lorri Shealy Unumb serves as the Vice President for State Government Affairs with Autism Speaks. In her role she travels extensively and aims to replicate South Carolina's autism insurance mandate in other states.  In the five years since Ryan's Law passed, over 30 states have passed similar laws. You can watch a YouTube video of Lorri Shealy Unumb speaking in Missouri in support of autism insurance legislation.

Advice to Parents: Lorri Shealy Unumb gave this advice for autism parents in a message to Autism Light on July 28, 2013.

Take it upon yourself to educate those around you about autism, and assume that people want to help. They just don't know what to do. I certainly wouldn't have known how to be helpful to an autism family before my son was diagnosed. Assuming people want to help has been my philosophy in approaching the legislators I've worked with, and I've considered it my job to inform them about autism and what they can do (Lorri Shealy Unumb-7/28/2013).

Social Media: You can follow Lorri Shealy Unumb on the following social media areas.
Special thanks to Lorri Shealy Unumb for being an Autism Light. Her efforts for the cause of autism now go far beyond their beginnings to help her home of South Carolina. The victories that she has helped win in state legislators for autism will have far reaching consequences for autism families.
Autism Light honors diverse heroes to the world of autism.

The photo in this post is used with permission of Lori Shealy Unumb.
Posted by Alan Stokes at 7:34 AM