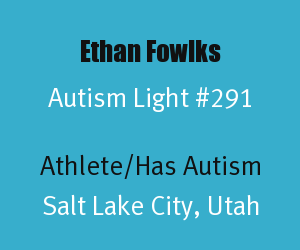 Ethan Fowlks is a 6th grader with autism from Salt Lake City, Utah, who is a member of the Salt Lake Sidewinders' Under 12 Baseball team. Ethan Fowlks is an Autism Light because he is a very talented baseball player and is impacting the way people around him think of autism.

Here is a news story on a dramatic game that Ethan Fowlks had to help his team win the championship.

The Salt Lake Sidewinders' under 12 team were playing in a championship game in Cooperstown, New York on July 11, 2013. With his team trailing 2-0 in the 9th inning of the game against the Tallahassee, Florida Heat, Ethan Fowlks stepped up to bat and he hit a 3 run walk off home run to win the game for the Sidewinders. Thanks to Ethan's home run "the Sidewinders became the first Utah team to win a championship game at the Cooperstown Dreams Park in Cooperstown, New York, home of the Baseball Hall of Fame (Source)."

Ethan described his walk off home run as "Probably one of the most wonderful experiences of my life. Having to make history to make Utah proud (Source)."

Guy Fowlks said about his son's baseball talent, "When I started throwing pitches to him, his ability to track and hit the ball was extraordinary. It was impressive. The baseball field became the one place where he was more normal. Put him on the field and let him play the game, that's where he wants to be. It's his world (Source)."

Rob Jeppsen, Ethan's coach, said, "Baseball has been a big enabler for Ethan. He's remarkable. He plays ball, has a good time and sits in the dugout with his friends (Source)."

Special thanks to Ethan Fowlks for being an Autism Light. His talent as a baseball player is an inspiration to others with autism who are wanting to be involved in competitive sports.  Read the Autism Light Sports page to read more about other sports players with autism.


Autism Light honors diverse heroes to the world of autism.
Posted by Alan Stokes at 8:05 AM