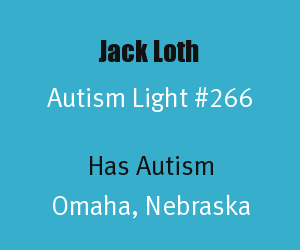 Jack Loth is an inspirational young adult with autism from Omaha, Nebraska. He was born on July 5, 1992. Jack Loth has been spreading light for several years through his efforts to raise money for charitable causes and his encouragement to his high school baseball team, where he served as the manager for two years. Jack Loth is an Autism Light for making the world brighter for people in his community.


Jack Loth has autism. He is walking backwards to raise money and awareness for Special Olympics. He'll be on my show tonight @ 5.kfab.com

Jack's mother explained what motivated him to walk backwards and raise funds for the Special Olympics.
"He saw that he was going to be able to make a difference and give back to the community because that's really all he wants to be is a normal member of the community and not looked at as a kid with autism (Source)."

Jack Loth served as the Manager for his Burke High School Varsity Baseball Team in 2011 and 2012. In the Fall of 2011, "Loth told his mom that his only wish for his senior year at Burke was to not eat lunch alone. Within a few days, the baseball players joined Loth at lunch and made sure someone sat with him all school year (Source)." KETV produced a video of the news story featuring the Burke High School Baseball Team's friendship with Jack Loth. You can view it at this link. Autism Light originally was going to honor the Burke High School Baseball Team of 2012 for this attitude towards Jack Loth, but we felt they would want us to dedicate this entry to Jack's story. Here are some words about Jack Loth from his high school baseball team at Burke High.

Angel Guardians, Inc.: Jack Loth's most recent charitable cause has been to support Angel Guardians, Inc. by helping sell pies for their annual apple-pie fundraiser throughout the community. Angel Guardians is based in Omaha, Nebraska and their mission is to "improve the quality of life for special-needs teens and adults in the areas of housing, employment, fitness, socialization, and recreation (Source)."

Special thanks to Jack Loth for being an Autism Light. We wish Jack continued success as he shines his light to the world and represents the autism community in a way that only he can so uniquely and effectively do. Jack Loth's story is one of amazing abilities not a disability. We are honored to link this article with the Autism Light page featuring other amazing individuals with autism.