Dan and Will Haggerty

Autism Lights #270 are Dan and Will Haggerty. 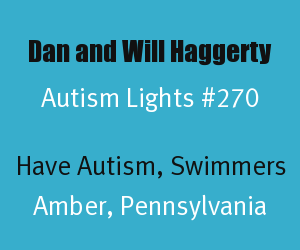 Channel 6 ABC in Philadelphia, Pennsylvania did a news story on Dan and Will Haggerty and their success in swimming.

Dan and Will Haggerty have enjoined success in the swimming pool and that has greatly increased their confidence.  Their Coach John High reflected on their first swim meet: "They jumped out of the water and they were like 'I won.' As they walked down the deck, I turned and the entire team was there giving them high fives, and hugs. It was totally unprompted and extremely heartwarming (Source)."


Dan and Will Haggerty's mother, Susan Haggerty said, "Over the years, it's been hard, but situations like this, having the chance to let them shine and show some skills. We knew they could swim, we just didn't know they could swim on this level. It was the most incredible experience (Source)."

Online Articles: The following articles have been written about Dan and Will Haggerty.
Special thanks to Dan and Will Haggerty for showing parents and individuals with autism how it is possible to be successful at swimming. We wish them the best in their high school career as swimmers and in all their endeavors. They are truely two brothers who are an inspiration for autism.