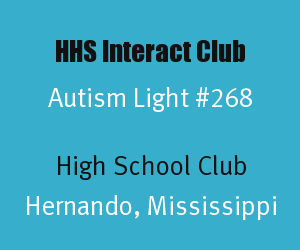 Hernando High School is located in Hernando, Mississippi in DeSota County, Mississippi. The high school's Interact Club has provided leadership for an annual community observance of the "Light It Up Blue" Campaign, beginning in April, 2012, in observance of World Autism Awareness Day. Hernando High School's Interact Club is an Autism Light for leading their community in the Autism Speaks Light It Up Blue Campaign for Autism Awareness Day in April.

For two years Hernando High School's Interact Club has been able to get the high school and many community businesses to light their buildings up blue. Holly Neel and Angela Gregg are two of the clubs teacher/sponsors.

Hernando High School Interact Club, which is sponsored by the Rotary Club of Hernando, is made up of approximately 110 members and 4 sponsors. In April of 2012, the HHS Interact Club hosted the first "Light It Up Blue" event at Hernando's historic Square. This event brought over 500 people to the square in hopes of spreading autism awareness (Source).

Autism Light honors diverse heroes to the world of autism.
Posted by Alan Stokes at 10:24 AM

Email ThisBlogThis!Share to TwitterShare to FacebookShare to Pinterest
Labels: Autism, Light It Up Blue, Mississippi, Schools