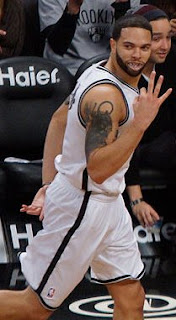 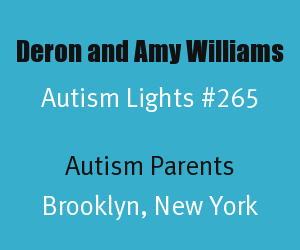 The following was a video that Deron Williams did for NBA Cares about his passion for autism.

Deron Williams said this about his son's diagnosis of autism.


It was tough because you start thinking. 'Is he going to have a normal life?' Is he ever going to get married? Is he going to be able to play sports?' It was sad, tough on us for a while. It's been awakening. And you have to learn to be a little bit more patient (Source).

Basketball Career: Deron Williams played college basketball for the University of Illinois. In 2005 he led Illinois to the NCAA Championship game where they finished runner-up. Deron Williams has played in the NBA for 7 seasons and is currently an All-Star Guard for the Brooklyn Nets. You can see his career stats at this link.

Here is a video of when Deron Williams set an NBA record for 9 three pointers in a half of a game on March 8, 2013 against the Washington Wizards.


Point of Hope creates opportunities to help raise funds that can directly impact the lives of children in need. The foundation has supported cancer research, children with autism, different scholarship funds, single mother organizations, Boys & Girls Club, and a number of different children organizations through grants and donations (Source).

Here is a video of the Point of Hope Foundation giving to the community.


On December 22, 2012, Deron and Amy Williams hosted a special holiday party at the Distilled in New York City to shine a light for single mothers of children with autism who were impacted by Hurricane Sandy (Source). The Point of Hope Foundation partnered with Autism Speaks in the holiday event. 30 families had their holiday brightened by this event and, "The families were also gifted with toys, some of which were featured on the Toys "R" Us Toy Guide for Differently-Abled Kids and the Ten Toys that Speak to Autism (Source)." Toys "R" Us was featured on this blog as Autism Light #8.

More Information: For more information on Deron and Amy Williams visit these Websites.
Social Media: You can follow Deron Williams on the following social media.
Special thanks to Deron and Amy Williams for the light they shine for Autism. We wish their family the best and look forward to hearing how the Point of Hope Foundation helps needy children, including some with autism, in the years ahead. Deron Williams' post at Autism Light will be linked on the Autism Light Sports Page, where he becomes the first NBA player listed who is also an autism father.

The photo of Deron Williams is in the Creative Commons of Wikipedia.
Posted by Alan Stokes at 4:36 PM