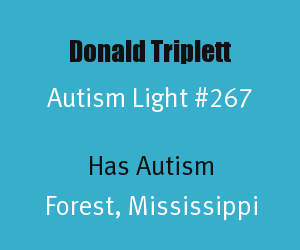 Donald Triplett was referred to as "Case 1....Donald T" in a 1943 medical article and starting with that piece of information John Donvan and Caren Zucker were amazingly able to track Donald down in Forest, Mississippi. Here is a video that John Donvan and Caren Zucker called "Finding Donald" about their research of locating Donald for an article they penned for the Atlantic in October, 2010 (Source).

Dr. Leo Kanner: At the persistance of his parents, Oliver and Mary Triplett, Donald Triplett was evaluated by Dr. Leo Kanner at John Hopkins University in 1938. Kanner was known as the nation's top psychiatrist of his day. There was no label for Donald's condition at the time, but Dr. Leo Kanner began to see the same traits in a handful of other children and it was eventually confirmed as autism. One telling observation Dr. Kanner made about Donald Triplett's education is this: "He attended a country school, where his peculiarities were accepted and where he made good scholastic progress (Source)."

FOR ALL THE PROGRESS that Donald has made in the decades since—the driving, the golfing—conversation is an art that continues to elude him. He initiates on occasion, but his purpose is generally to elicit a piece of information he needs (“What time is lunch?”) or to make a passing observation (his comment about the sticker on our car). A regular chat, the casual back-and-forth of kicking around an idea, is something he has never experienced. (Source).

Hobbies: Donald Triplett's hobbies include golf, traveling, assigning numbers to people he meets, and watching television shows such as "Bonanza".

Donald Triplett's life has been remarkably blessed because of both the resources his parents had to prepare their unique child for life and the compassion the entire Forest, Mississippi community has had in taking Donald under their wings over the years. Donald eats every Sunday with his younger brother Oliver. Now that his parents are both gone, Donald relies on the support and protection of his community even more. To this day Donald's living expenses are provided for through an irrevocable trust fund that his family established for him.

Special thanks to Donald Triplett for being an Autism Light. Donald and all those, who have been part of his support network over the almost 80 years of his life, demonstrate to us that an individual can have a life full with autism. For more information on Donald Triplett read the full article that appeared in The Atlantic in October, 2010. If there was ever any evidence needed that individuals with autism can live a normal life span, one needs only to look at Donald Triplett. His story is a reminder that plans need to be made in society for the care of both adults and senior adults with autism.

Autism Light honors diverse heroes to the world of autism.
Posted by Alan Stokes at 10:36 AM

Email ThisBlogThis!Share to TwitterShare to FacebookShare to Pinterest
Labels: Autism, Has Autism, Mississippi