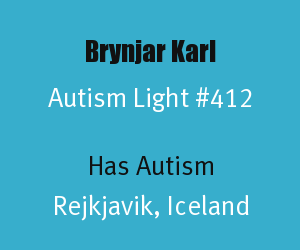 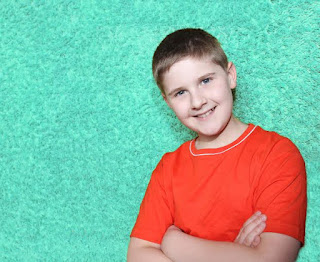 Brynjar Karl is an 11 year old who has autism and lives in Rejkjavik, the capital city in the country of Iceland. Brynjar Karl is an Autism Light for the awareness he has brought to autism through carrying through with his 11 month project to build a 6,33 meter replica of the Titanic out of 56,000 LEGO bricks. Brynjar Karl will also hold the distinction of representing the first Autism Light who comes from Iceland, making it our 26th country to be featured.

The following is a video that Brynjar created along with his mother.

Brynjar has a three fold message for other kids about fulfilling their dreams and making them a reality.
(Source- Email to Autism Light from Bjarney Ludviksddottir on June 14, 2015).

Here is a June 2015 video about his work spreading autism awareness.

To the right is a photo of Brynjar with his sister Magdalena Björk Birgisdóttir. Magdalena has been very supportive of Brynjar's projects and is his number one fan.

Brynar is currently working to find potential hosts that would be interested in placing his Titanic ship on display. Brynjar Karl follows his ship wherever it goes and shares messages to the public that view it about the positive side of autism and that everyone can make their dream come true.

This photo demonstrates the size of the Titanic that Brynjar created.


Social Media: You can follow Brynjar Karl on the following social media pages.

Visit his website at www.brynjarkarl.com to track progress on his work.
Special thanks to Brynjar Karl for being an Autism Light. We hope to hear exciting things from him in the future as he continues to use his creativity in life. He is truly an inspiration to others with autism that amazing projects can be accomplished when one puts their mind to it.

Photos: The photos in this post were used with permission of Brynjar Karl's mother Bjarney Ludviksdottir.

Email ThisBlogThis!Share to TwitterShare to FacebookShare to Pinterest
Labels: Autism, Has Autism, Iceland