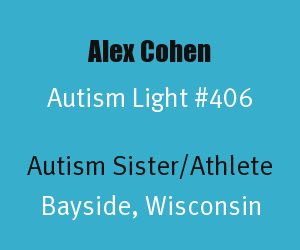 The following is a video done on Alex Cohen as one of the Faces of the Big Ten.

Autism Speaks U: Alex Cohen served as the President of Autism Speaks U at Northwestern University from 2012-2014. In her senior year (2014-2015) she transitioned to the Vice-President and created and led an initiative for autism awareness and fundraising called NU Goes Blue.

"Most of the events we've coordinated through Autism Speaks U have been geared specifically toward Northwestern students," said Cohen. "I really wanted to create something that the surrounding community could be involved in as well. When I thought of the idea for NU Goes Blue, one of my main goals was raise autism awareness beyond Northwestern's campus and into the Evanston and Chicagoland communities. We're bringing everyone together for a fun evening that supports a great cause (NU Sports.com, September 29, 2014)."

Alex Cohen's work for Autism Speaks U earned her a spot on the 2015 All State Good Works Team. Here is a video of her selection.

Special thanks to Alex Cohen for being an Autism Light. We wish her all the best in her professional basketball career and in her future work as an autism advocate. Alex is representative of the growing number of autism siblings who are poised to make a difference in the world for their relatives and for all those impacted by autism.