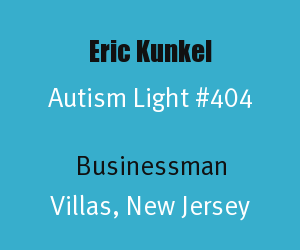 Eric Kunkel is a businessman, husband and father from Villas, New Jersey. Eric Kunkel is an Autism Light for the kindness he showed a three year old girl with autism named Kate Mouland, who he was sitting next to on an airline flight on January 6, 2014 and for his subsequent work on behalf of Easter Seals New Jersey.

Eric Kunkel works as an Executive Vice President at MMA Technologies Corporation. He graduated in 2008 with a degree in Business Administration from the University of Phoenix (Eric Kunkel Facebook Page).  He earned his degree in Management from Slippery Rock University and graduated from Wilson High School in West Lawn, Pennsylvania in 1991.

Eric Kunkel was travelling by airplane in January 6, 2014 and sat in seat 16c on Flight 1850 to Philadelphia. He sat next to Kate Mouland and her mother Shanell Mouland. Kate has autism and her mother was apprehensive about how she would handle the flight sitting next to a stranger.

After he sat down Kate started calling Eric Kunkel her "Daddy". He didn't correct her and he reacted in a sensitive manner and let Kate use his iPad and carried on a conversation with her. Because of Eric's handling of the situation Kate was able to have her most successful plane ride ever.

Eric Kunkel's family has now become friends with Kate Mouland's family, but after the flight Shanell Mouland did not even know his name. Shanell Mouland is a blogger and wrote a post in her blog Go Team Kate about thanking a stranger in seat 16c of Flight 1850 for his kindness. In the post, Shanell Mouland writes,

You could have shifted uncomfortably in your seat. You could have ignored her. You could have given me that 'smile' that I despise because it means; 'manage your child please.' You did none of that. You engaged Kate in conversation and you asked her questions about her turtles. She could never really answer your questions but she was so enamored by you that she keep eye contact and joint attention on the items you were asking her about. I watched and smiled. I made a few polite offers to distract her, but you would have none of it (Shanell Mouland, Go Team Kate, January 9, 2014).


The post went viral and reached Eric so there could be a reunion. The following is a news story on Eric Kunkel and his experience with Kate Mouland.

Special thanks to Eric Kunkel for being an Autism Light. Eric Kunkel's kindness toward Kate Mouland is an example of how airplane travelers can treat encounters with individuals with autism.

Autism Light honors diverse heroes to the world of autism.
Posted by Alan Stokes at 9:37 PM