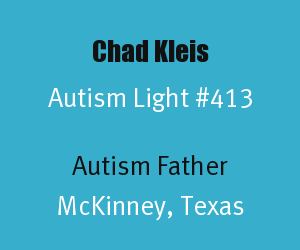 Chad Kleis is 40 years old and is an Autism Father from McKinney, Texas. Chad and his wife Amy have a 9 year old son named Hunter and a 7 year old son named Hudson. His son Hunter has autism. Chad Kleis is the Founder and Director of Hunters Autism Specials. Chad Kleis is an ideal Autism Light for this Father's Day, because of how he raises awareness for autism through Hunters Autism Specials, and because he loves his son so much that he orchestrated on social media a fantastic birthday present for his son Hunter, helping him receive almost 10,000 birthday cards from around the world when he turned 9 on March 15, 2015.

In March of 2015, Chad asked his 400 friends on Facebook to help him wish Hunter a Happy Birthday by sending him cards, since while Hunter is nonverbal he enjoys reading. The message went viral and was shared thousands of times. Hunter received almost 10,000 cards from all over the world, including places as far away as Ireland, the Netherlands, and Hawaii (Dad's Birthday Request for His Son With Autism Goes Viral, WFAA, March 5, 2015).

The story of Hunter receiving surprise birthday cards from around the world was reported on by ABC, CBS, Yahoo, Dallas Morning News, KISS FM, and the New York Daily News. Here is the news story done by ABC News.

Chad Kleis shared his love for his son Hunter in the following hope. "The life ahead of him is what scares me. I don't care if he never talks. I wish he did, but I just want to make sure he's happy (Dad's Birthday Request for His Son With Autism Goes Viral, WFAA, March 5, 2015)."

Contact and Social Media: The best way to contact Chad Kleis is at the Contact Us secton of the Hunters Autism Specials Website  or on the Hunters Autism Specials Facebook Page. They would really appreciate your social media support by "liking" their Facebook Page. You can also follow them on Twitter @HASpecials.
Hobbies: Chad Kleis is originally from Minnesota and cheers on the Minnesota Vikings from Texas. He enjoys being with his family, watching movies, swimming, and jumping on the trampoline.

Encouragement to other Autism Fathers: Chad Kleis wrote the following perspective in an email to Autism Light on June 19, 2015.


Everything in this world happens for a reason, we might not know or understand why NOW... But one day, it will all make sense (Chad Kleis). 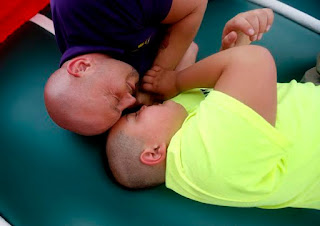 Chad also shared this perspective on his son Hunter, "I try to help people understand how Hunter is.The best way to explain it is; Hunter is the CEO of his world, and my wife and I are on the board of directors. We can ONLY make recommendations to the CEO, it will be up to Hunter if he wants to accept or reject those recommendations. We won't force anything on Hunter, that includes people. So, allow him to get to know you at his pace, and you will have a much better chance of being accepted and joining the board..."

Hunter: Hunter is very blessed to have a caring father and mother on his Board of Directors. His parents have found that ABA and Speech therapy have worked the best with him. They are considering trying Music Therapy too. Hunter has previously been through Horse therapy, but he lost interests in that.

Future Plans: Chad Kleis is working on a program which will connect families with autism to other families that want to connect, and provide OUTSIDE love and affection (Even if it's from a distance) so that others might experience something similar to what Hunter did when he received those thousands of Birthday cards.

Chad is also working on getting Hunters Autism Specials from places all over the world. In addition, he would like to long term establish a self-funded insurance program to cover ALL related needs regarding Autism services in order to reduce the stress, hassle, and red tape that autism families frequently experience related to relationships with insurance companies.

We wish Chad Kleis and all autism fathers a very Happy Father's Day. May Chad's work continue to inspire his family and the autism community around the world to grow and live a more fuller life.

Photos: The photos in this post were used with permission of Chad Kleis.
Posted by Alan Stokes at 12:13 AM