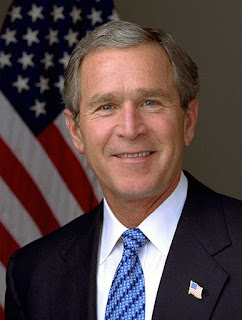 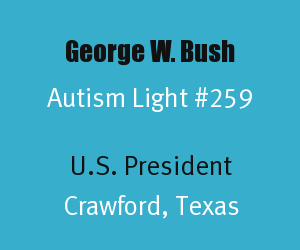 On this President's Day 2013, we are honoring a former U.S. President who recognized the growing implications autism had for the United States in the 21st Century and as President signed landmark single disease legislation that dedicated historic federal resources toward research, education, and awareness to fight the autism epidemic.

Meets Autistic Hero Jason McElwain: In 2006, George W. Bush met with amazing autistic basketball hero Jason McElwin, who was Autism Light #150. George W. Bush said he watched the footage of Jason McElwain's amazing performance of scoring 20 points in 4 minutes on television and added, "I wept, just like a lot of other people did. It's just one of those stories that touched a lot of people's heart (Source)." Here is more from a news story on that meeting.

For the millions of Americans whose lives are affected by autism, today is a day of hope. The Combating Autism Act of 2006 will increase public awareness about this disorder and provide enhanced federal support for autism research and treatment. By creating a national education program for doctors and the public about autism, this legislation will help more people recognize the symptoms of autism. This will lead to early identification and intervention, which is critical for children with autism. I am proud to sign this bill into law and confident that it will serve as an important foundation for our Nation's efforts to find a cure for autism --George W. Bush 12/19/2006 (Source).

You can read more about the provisions of the Combating Autism Act of 2006 at an archived White House webpage or at the Library of Congress' online database on the legislation. The Combating Autism Act of 2006 had four major categories of initiatives (Source).
This landmark autism legislation had the support of Bob and Suzanne Wright who were Autism Lights #177 (Source). In this 2006 interview Bob and Suzanne Wright discuss the benefits of this legislation to the autism community.

Other Sources: You can read more about George W. Bush's biography at the following sites:


On this President's Day we say thank you to former President George W. Bush for being an Autism Light and giving hope and help to autism families when he signed the Combating Autism Act in 2006.  The Combating Autism Reauthorization Act (CARA) of 2011 was signed by George W. Bush's successor Barack Obama, and the foundation started by George W. Bush signing the original 2006 law continues to help with the ongoing autism research, prevention, and treatment to this day.

The photo of George W. Bush is in the Public Domain.
Posted by Alan Stokes at 6:12 AM