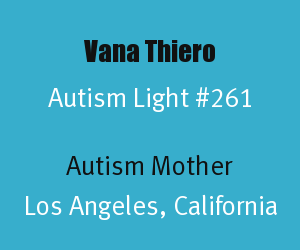 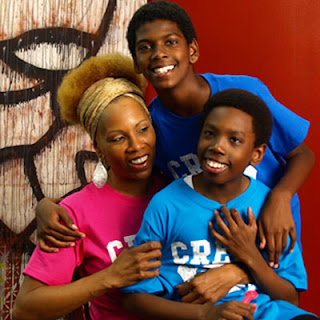 Vana Thiero is a film producer and single mother of two boys who have autism, Carter and Bakary. She lives in Los Angeles, California. Vana Thiero is developing a documentary series of 5 parts called My Thiero Boys to show what real everyday life with autism is like in her family. Vana Thiero is an Autism Light for her dedication as a mother and autism advocate, and for the constructive impact her films on autism can make towards greater autism awareness in society.

Education: Vana Thiero earned her BFA and her MA in Communications from Western Michigan University.

Film Experience: In 1987 she partnered with producer Jim Heyden to produce commercials and instructional music videos. Vana Thiero worked for CNN from 1994-2002, and won an Emmy for their "9/11 coverage." She also produced the documentary "Low Riders the Real Story" and edited for "Inside Edition" and BET's "Comic View".

The following is a KCAL9 News story that featured Vana Thiero and her autism awareness efforts.


Faith-Based Inspiration: Vana Thiero has received blessings from her families faith based involvement with In His Presence Church. The church is featured in the My Thiero Boys video series.

Sears Family Pediatric: Dr. Robert W. Sears provided some of his insight in the My Thiero Boys project.


Advocate! The future of autism depends on an expanded consciousness regarding how, we as a global society, plan to care for ASD individuals when parents are no longer around. Get loud get creative. Educate others regarding how they may employ our children and let's be confident to teach our children how to earn an income doing what they do best. Push the kids to succeed the same as we do with our typical kids. Expect Success!!!

Here is the trailer to the first video in the My Thiero Boys film series.

Vana Thiero writes on her website about the mission of the My Thiero Boys documentary to reach the broad autism community.

The mission of "My Thiero Boys" is to create awareness regarding the needs, behaviors, and lifestyle inherant in the autism culture to better equip the world, helping all who view the film(s) understand and learn how to include the autism culture into society both socially and professionally. The autism culture is made up of children and adults who are diagnosed with autism as well as relatives, friends, educators, therapists, medical professionals, attorneys, politicians, advocates, neighbors, etc: those whose daily lives are impacted by autism (Source).

Contact: For more information on the My Thiero Boys documentary email info@mythieroboys.com.

Social Media: You can follow My Theiro Boys and Vana Thiero at the following social media pages.
Special thanks to Van Thiero for making a documentary that can share with the world what autism is like. Van Thiero is shining her light for autism as a mother and a film maker.

The photos in this post were used with the permission of Van Thiero.
Posted by Alan Stokes at 10:51 AM