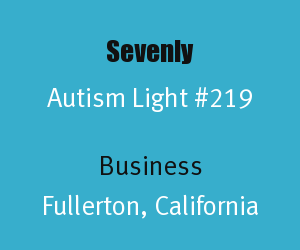 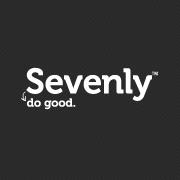 Sevenly is a business in Fullerton, California that, since they launched on June 14, 2011, have been helping one cause each week of the year by giving to them a portion of the sales of their products that week.  Sevenly partnered with Autism Speaks the week of July 24-30, 2012. Sevenly is an Autism Light for supporting Autism Speaks and raising awareness for autism in social media.

Sevenly describes their business in the following way:


Sevenly is a weekly cause activation platform. Some have even called us a cause crowdfunding platform. Every week (7 days) we partner with a new non-profit organization, we create unique art and limited edition products that we sell exclusively on our website Sevenly.org for 7 days. For every product sold, we give that week’s non-profit organization $7. For example, if we sold 1,000 products, Sevenly would donate $7,000 (Sevenly.org Website/FAQ).

In their Frequently Asked Questions they describe their driving force as a "desire is to move a generation toward generosity and an intentional love for others" and that their purpose is driven from a passage in the Bible--Matthew 22:36-40. (Source). 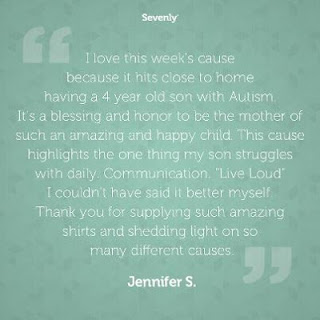 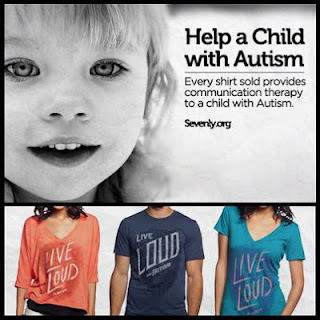 The illustration style of the lion is meant to represent power and strength. The effect of autism on individuals suffering from the disorder as well as people connected to it such as parents and siblings can be exhausting. The lion represents power and strength so instead of focusing on the issues of people affected by autism we decided to focus on the strength and courage of these individuals. These are people who are extremely determined, talented and courage to say the least. They are not weak, or broken and incapable — We are inspired by their strength and want to encourage them to stay strong (Sevenly.org Website).

One of the keys to the success of Sevenly is that they have a dedicated and hip social media program that compliments their marketing efforts. Each week the designated cause benefits from their social media blitz. Here is one of the Tweets that came from Sevenly's Twitter account.

Do not worry about why problems exist in the world -- just respond to people's needs. #ServeOthers
— Sevenly (@sevenly) July 26, 2012

Social Media: You can follow Sevenly on the following social media areas.

Order your limited edition Sevenly product on the "Speak Loud" autism theme while there is still time. Special thanks to Sevenly for supporting autism and making it their featured cause the last week of July, 2012. Sevenly is indeed an Autism Light.

Photos: The images of Sevenly were used with permission of Ryan Wood and can be found on their Facebook page.