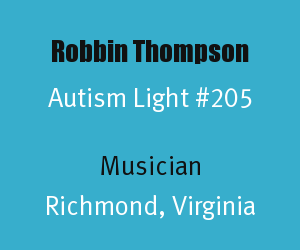 Robbin Thompson is a Folk Rock Music singer from Richmond, Virginia. He has been a musician for over 40 years in a career that has included being the lead singer in the early Bruce Springsteen band Steel Mill. Robbin Thompson is an Autism Light because he wrote an autism awareness song for military families called Maybe Tomorrow.

Robbin Thompson career of over 40 years includes these achievements.
The song Maybe Tomorrow is the real life true story of San Diego Marine Corps wife Karen Driscoll and her son Paul. You can purchase the song at Robbin Thompson's page on CD Baby. Here is a news story on Robbin Thompson and his autism awareness song for military families.

Special thanks to Robbin Thompson for being an Autim Light and giving the autism community a song that represents the real life military families struggling with autism. We hope Maybe Tomorrow will continue to raise awareness of this important part of the autism family. For more information on Robbin Thompson visit his official websie at www.robbinthompson.com.

Autism Light honors diverse heroes to the world of autism.
Posted by Alan Stokes at 7:45 AM