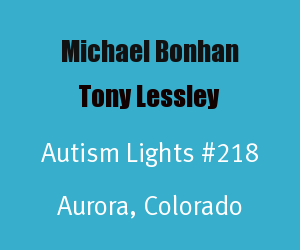 Michael Bonhan and Tony Lessley are Park Rangers from Aurora, Colorado who joined Aurora Police, dogs and volunteers of the Citizen Emergency Response Team to search for a missing boy with autism named Brandon Wells on June 12, 2012.  Michael Bonhan and Tony Lessley were the two searchers to find Brandon Wells and they are Autism Lights for their critical part in this rescue.

Tony Lessley said, "We just got lucky that we were in the right place at the right time and spotted the boy out in the field in one of our open spaces. He was just standing there looking like he was trying to have someone come get him (Source)."

You can read more information on the story and view a news video from the Channel 7 News - Denver website at http://www.thedenverchannel.com/news/28216508/detail.html.

Special thanks to Michael Bonhan and Tony Lessley for joining the search for Brandon Wells in Aurora, Colorado and for being the ones to find him.  They are representative of the many searchers who find people with autism each year.  People like Brandon Wells, who actually do have autism in Aurora, Colorado, are in good hands with Park Rangers like Michael Bonhan and Tony Lessley nearby, if they are proon to wandering.
﻿
Autism Light honors diverse heroes to the world of autism.
Posted by Alan Stokes at 7:13 AM