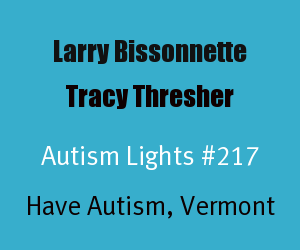 Larry Bissonnette and Tracy Thrasher are from Central Vermont. They both have autism.  They were two of the first people with autism in the State of Vermont to communicate effectively by typing. They are autism advocates who starred in the 2012 Documentary Wretches & Jabberers. Larry Bissonnette and Tracy Thrasher are Autism Lights because of their efforts in autism advocacy to show the world the intelligence of nonverbal individuals who have autism.

Documentary: Gerardine Wurzburg was the Director of the Documentary Wretches & Jabberers which follows the journey of Larry Bissonnette and Tracy Thrasher around the State of Vermont and to visit their friends and fellow autism advocates Chammi in Sri Lanka, Naoki Higashida in Japan, and Henna and Antti in Finland. Assisted by their supporters Pascal Cheng and Harvey Lavoy, Larry and Tracy also were able to travel in this advocacy project and along the way to also speak at autism conferences in Japan and Finland. Here is the trailer to Wretches & Jabberers.


His work is in the permanent collection of the Musée de l'Art Brut, Lausanne, Switzerland and in many private collections. His work was most recently featured in the Hobart William and Smith Disability and the Arts Festival in April, 2010. He is both the subject and writer of an award winning film about his life, called, My Classic Life as an Artist: A Portrait of Larry Bissonnette (2005) (Source).

Be sure and check out Larry's blog.

Tracy Thresher: Tracy Thresher is an autism advocate from Barre, Vermont. He learned to communicate with others by typing at age 23 in 1990. In the Documentary he is shown visiting a Vermont State Senator. Tracy says some profound things in the film such as, "We are the perfect example of intelligence working out itself in a different way." His website shares this tribute about Tracy Thresher's work as an autism advocate.


He has presented at local, statewide, and national workshops and conferences. He has consulted with local schools, is a member of the Vermont Statewide Standing Committee and has worked for the Green Mountain Self-Advocates in Montpelier, Vermont. In Vermont, he mentors teenagers and adults. Most recently, Tracy has consulted at Syracuse University as a lead trainer (Source).

Be sure and check out Tracy's blog.

Movie Availability: The movie Wretches & Jabberers is available to watch on Demand services such as Hulu.com or Netflix on Demand.  It may also be purchased through iTunes or on DVD.

Autism Light honors diverse heroes to the world of autism.
Posted by Alan Stokes at 7:13 AM