Suzanne Wright (Autism Light #177) passed away on July 29, 2016, after a 9 month battle with pancreatic cancer. Her obituary was released by Autism Speaks. This post will remain at Autism Light in her memory and as a tribute to her husband Bob Wright who was featured jointly with her. Suzanne Wright's name will be placed on the Autism Light Memorial Roll today. 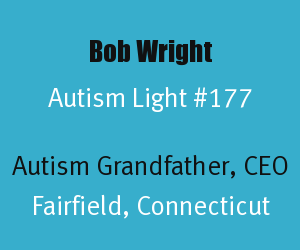 Bob and Suzanne Wright have been longtime residents of Fairfield, Connecticut. Bob Wright is a businessman who is a former CEO of NBC Universal (1986-2007) as well as a former Vice-President of General Electric. In 2004 their grandson Christian was diagnosed with autism. After seeing the need for a national advocacy organization for autism, they co-founded Autism Speaks in February, 2005. Bob and Suzanne Wright are Autism Lights for founding the Autism Speaks organization that has touched thousands of lives by raising awareness of autism from the halls of Congress to the plains of the heartland.

The following is a video about Autism Speaks and the role that Bob and Suzanne Wright had in starting this autism organization.

Autism Speaks: Autism Speaks has been a critical part of the Autism Light blog since the beginning, but we wanted to wait for World Autism Awareness Day to recognize their founders. Over 25% of our previous subjects that have been honored on this blog in the past are in some way involved with or using the resources that are made possible by the leadership of this important organization to autism. One of the notable Autism Lights is Kerry Magro who was Autism Light #119. Kerry Magro serves on staff of Autism Speaks and was a leader of the "Light It Up Blue" Campaign in 2012.


Autism Speaks has grown into the nation's largest autism science and advocacy organization, dedicated to funding research into the causes, prevention, treatments and a cure for autism; increasing awareness of autism spectrum disorders; and advocating for the needs of individuals with autism and their families.

You can access the multitude of resources from Autism Speaks on their website at www.autismspeaks.org. On the website Bob and Suzanne Wright give a message to visitors that says, "We created this organization because of our grandson Christian and for the millions of children in the world just like him. Everyday they serve as our inspiration as we continue on our journey to find the missing pieces of the autism puzzle. Thank you for joining us in this pursuit (Source)."

The following is a video of the ceremony where Bob and Suzanne Wright received the Honorary Doctor of Humane Letters from St. Johns University on May 16, 2010.

Autism Light honors diverse heroes to the world of autism.
Posted by Alan Stokes at 6:55 AM