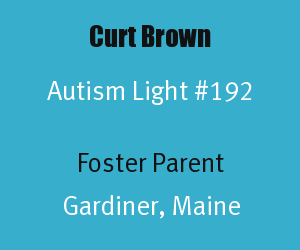 Curt Brown is from Gardiner, Maine.  In 1984, Curt Brown started serving as a foster parent for adult men with autism, caring for them around the clock in his own home. He served as caregiver, household manager, and attended to all the varied needs of the group of disabled men. When he retired form this role in 2008, he was caring for 7 men. Some of the men had literally lived with Curt Brown for over 20 years of their life and viewed him as a father figure. Curt Brown is an Autism Light because of his dedication and active role in supporting adults with autism.

The following is a descriptive photo collage of Curt Brown's story developed by Kevin Wellenius. Kevin Wellenius called his presentation, A Life Pretty Full of Love. The presentation  by Kevin Wellenius (which contains actually audio in the version on his website) was superbly done and won 1st Place for Feature Audio Slideshow in the Best of Photo Journalism -2010. The photos were taken between 2007 and 2009 and followed Curt Brown's story prior to his retirement in the Fall of 2008, through when the adult men with autism were relocated to new homes. Note: If you put your cursor on the photo you can read a description of each one.


In the above presentation Curt Brown explains what he learned to make his foster parenting work. He said, "ultimately what we found was the most successful was making a cohesive family unit and treating everybody as a valid family member."

During the final years of Curt Brown's work, the seven men he cared for were Graham Weston, Ben Brendahl, Lee Calderwood, Keith Keller, Aaron Bridgham, Timmy Barton, and John Williamson. All the 7 men were found other suitable living arrangements when Curt Brown retired in 2008. Three of the more severely disabled men were kept together and ended up living together with the Mark and Sheila Pelletier family. Mark Pelletier knew the men because since 1996 he has worked with them in the Art & Crafts/Carpentry work program for the men where they builds recycled bird houses (Source).  Curt Brown indicated in this presentation that he planned to keep in contact with the men and was going to invite some over to his home for special occasions or to give Mark and Sheila Pelletier respite.