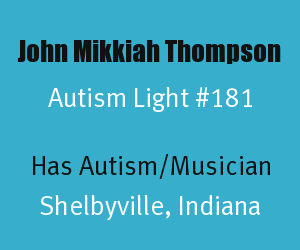 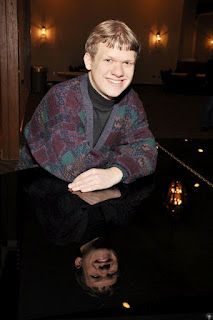 On this Third Sunday of Advent we wanted to revisit the story of a Christian young man with autism who we first featured on Autism Light back on Easter Sunday, 2012.

John Mikkiah Thompson will turn 21 years old this week and is from Shelbyville, Indiana. He has autism and did not speak until he was age 8, but he is making a tremendous difference in this world through his Christian music that spreads the message of his personal Christian faith. John Mikkiah Thompson is an Autism Light for the awareness he brings to autism when he shares his outstanding musical talent and gifts of faith.

If you hear John Mikkiah Thompson sing it is clear that there is a lot of heart behind his words. The reason for this may be because the music came to this young man with autism before he had any words. And he credits this victory to the act of the God he praises and adores through his music.

John's father Grant Thompson said to Autism Light, "By the time John was 8 years old he could listen to just about anything and play it the same day. This is what the Lord used to "unlock" John Mikkiah Thompson's tongue. When he holds that Mic in his hand or sits down behind the piano, a Miracle takes place right before your eyes EVERY SINGLE TIME. All of the autism disappears and you would never, ever known that it even existed."

The following is a video of John Mikkiah Thompson singing his song "I Believe" on YouTube.

John's song, You Made Me Who I Am was written by his father Grant Thompson and a version of him singing this is below.

Past Awards: Dann Veldkamp of The Center Grover Community Newspaper describes John's experience on the stage this way, "Once John Mikkiah's talent was recognized his career started to take off. In 2010, he won the 'Shelby Idol" contest and swept multiple categories in the Franklin Fall Talent Contest. He appeared at the 2010 Indiana State Fair and formed the National Anthem at the opening of the Indianapolis Motor Speedway in May, 2011 (Source)."
At the Strand Theater: The following is a video of John singing at the Strand in Shelby, Indiana. He is introduced with the master of ceremonies reading a letter from his family that tells a story of how autism, music, and faith have been a part of John Mikkiah Thompson's life.

Not Giving Up: Like each of us in our own way, John Mikkiah Thompson continues to work at areas he can grow in his life and he is involved in ABA therapy for his autism. John offered the following advice for people with autism about finding success in life: Never Give Up and the Lord Will Help You!

Special thanks to John Mikkiah Thompson for singing the songs of praise and blessing churches and community groups with his talent. We expect to continue to hear great things about his music in the future and how it is a blessing to thousands of people.

Photo: The photo in this post is used with permission of John Mikkiah Thompson.
Posted by Alan Stokes at 4:30 AM