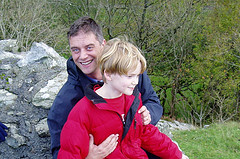 As autism increases to epidemic proportions it is more frequently being mentioned by the media. But do writers who cover autism really understand firsthand the real people that journey with autism every day? Or are they just tourists visiting a foreign culture and land known as autism? Today's Autism Light has a special lens through which he can write about the subject of autism. Christopher Stevens is a journalist and writer from Bristol, England. He and his wife Nicky have two sons and their youngest David has autism. Christopher Stevens is an Autism Light because he is using the content he produces as a writer to share real stories about autism, that are able to spread autism awareness to the far corners of the earth in today's digital age.

Journalism Career: Christopher Stevens has been in journalism since he was 18 years old. Christopher Stevens has worked since 1998 as a senior revise sub-editor at the The Observer, which is the oldest Sunday newspaper in the world. Prior to coming to The Observer, he had worked for the Evesham Journal, the South Wales Echo, and then he was the books editor for the Western Daily Press. One of his predecessors as books editor for the Western Daily Press was Tom Stoppard.


I have been delighted to play a part in bringing together the Observer and the National Autistic Society in 2012: the newspaper will highlight the charity's work and raise awareness of the condition. The global popularity of the Guardian/Observer news website means, I believe, that people all over the world will gain a greater understanding of autism.

Author: Christopher Stevens has been the pen behind several autism related works that may interest people. 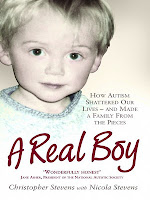 A Real Boy: Christopher Stevens' Memoir is the book A Real Boy, which was published in 2008. This book shares how their son David's autism affected their family and how he and his wife coped with it. This book is currently one of the recommended books in the Open University's autism module of the psychology degree course. You may purchase the book for Kindle at Amazon's page for the book.

A Girl Called Barney: Christopher Stevens wrote a fiction book called A Girl Called Barney. The story line of this book includes a single dad struggling to raise a toddler who has autism. You may purchase the book for Kindle at Amazon's page for the book.

Other Books: Christopher Stevens is the author of several other books that are not specifically connected to autism. You may review the list of those books on Amazon by visiting his Author's Page on Amazon.

For a taste of some of Christopher Stevens' other writings on autism check out these online articles.

Social Media: You can follow Christopher Stevens at the following social media areas:

In an experience that may inspire other fathers of children with autism, Christopher Stevens recounts some personal encouragement he found on a recent visit he and his son David made to Gloucester Cathedral.  When they arrived at the awesome Cathedral, David led his father like a laser beam to the candles in the church, his favorite place in the familiar facility. At the candles the two noticed some nearby steps to a recessed chapel and part of the Cathedral they had not visited before. Christopher Stevens describes what he found in this encounter with this previously unexplored area of the Gloucester Cathedral:


The walls of the chapel were beautifully decorated in a mosaic scene of patient, suffering figures, and above them in huge letters was a banner that read, 'Blessed is he who endureth.' I felt as if that message had been placed there for me, a hundred years or more earlier. The thought has given me a great deal of comfort, that sometimes all we have to do is endure and that is its own blessing.

Special thanks to Christopher Stevens for being an Autism Light. As an Autism father Christopher Stevens, deals with the same feelings and experiences that are unique to the autism community, and he has the influential opportunity as a journalist and author to put them to living words that are messages of awareness to the world.  Those words take on a life of their own, bringing hope, education, and encouragement as they are shared on paper and in electronic books, as well as in the 24 hour, 7 day a week presence of the Internet. The autism community is blessed to be able to follow the writings of an autism father who understands first hand the struggles we face every day.

Photo: The photo used in this post was used with the permission of Christopher Stevens.

This post went into syndication on Autisable.
Posted by Alan Stokes at 6:54 AM