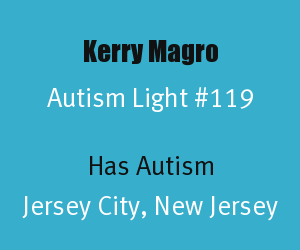 Kerry Magro shares his story through 3 poems in this video produced in 2012.

Awards: Kerry Magro received the 2011 Outstanding Individual with Autism Award presented at the Autism Society of America's Conference in Orlando, Florida. He has worked with Senator Robert Menendez on the renewal of The Combating Autism Act and on advocating that public buildings like the White House use blue lights in recognition of autism awareness month. Sen. Menendez was Autism Light #58.

The letter I would have written for my parents when I was nonverbal >> https://t.co/hahyLc2BuD #autism pic.twitter.com/CZR9M4J8iH
— Kerry Magro (@Kerrymagro) December 31, 2015


Key Note Speaker: Kerry Magro has spoken at over 400 events throughout the United States on autism and is available for future events. His upcoming speaking schedule is listed on his website. The following video is a TED presentation that Kerry gave in 2014 on the path of autism to college.


Author: Kerry Magro has written the following three books about having autism in special situations.

Movie Consultant: Kerry Magro was a consultant on the movie Joyful Noise that was released in 2012. The movie features a character who is an adult with Asperger's.

Photo: The photo in this post was used with the permission of Kerry Magro.
Posted by Alan Stokes at 1:55 PM