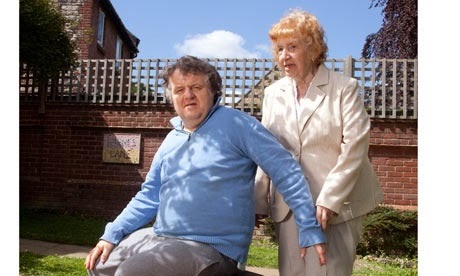 Joan Edge is an 82 year old widow who lives in Essex, England. For years she has been a very special mother, because her adult son Michael Edge has autism. Joan Edge is an Autism Light because she is an example of a faithful parent who has been there for her child from his diagnosis (at age 4) to his life today in his 50's.

Joan Edge and her late husband Cliff worked hard to give Michael Edge the proper care for his autism in a time in history where there wasn't a lot of help readily available. Christopher Stevens, himself a father of a child with autism, wrote an article on Joan Edge and Michael called, Autism's Early Child. He writes this about Joan's autism battle and concern for her son Michael.


She and her husband Cliff, a railway worker, fought to find the best school and the best treatment for their son, not once but again and again. Their family suffered appalling stresses, and Joan's health was almost destroyed. Even today, Joan faces daily worries about his future. "No one can tell me if he'll have a normal life span," she says. Not even Michael's most experienced care workers can offer a clue (Source).

Joan and her husband Cliff also hosted parties and dances over the years to raise money for autism charities in England. Read the inspirational story on Autism's Early Child about Michael Edge and his parents that Christopher Stevens wrote for The Observer at this link. The article gives a great history of autism in Britain and has dozens of heart warming details about the Edge family.

Michael Edge is an important part of the history of autism in the United Kingdom and his story is a happy one in large part to his mother Joan being there for him over the decades of his life. Joan and her son Michael still have a regular routine of visits and phone calls, although Michael receives his daily care from the Wessex Autistic Society.

Special thanks to Joan Edge for being an Autism Light and being a pioneer parent of one of the first children in Britain to be diagnosed with autism. Joan represents all the autism parents, whose hands on care for their children with autism goes decades beyond that which is required for a neurotypical child. Joan Edge exemplifies something that the late Betty Ford said, "You never know what you can do until you have to do it (Source)."

Photo: Photographer Karen Robinson graciously allowed Autism Light to use this photo of Joan Edge with her son Michael for the purposes of illustrating this blog post. The photo is Copyright Karen Robinson.
Posted by Alan Stokes at 10:35 PM