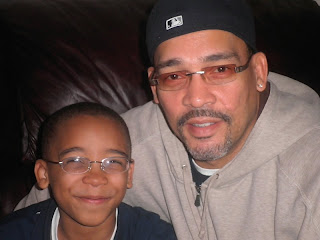 Charles Jones is from New York City and is a film director. Charles' son Malik has autism and he created a feature length Autism Awareness documentary about the perspective of fathers dealing with autism in their family. Charles Jones is an Autism Light because he is using his film production skills to raise awareness for autism and to help fathers understand that there are resources available for them and that they are not alone.

Autistic Like Me: Charles Jones has created a film on autism called Autistic Like Me: A Father's Perspective. The film will share the inspirational journey of five fathers from diverse paths of life whose children have been diagnosed with autism. In the film Charles Jones will also share his own challenges and victories of raising his own son Malik who has autism.

Charles has attempted to help fathers participating in the film deal with their feelings about having a child with autism and the release will hopefully open a window to the hearts of fathers on the journey called autism. Presently a 20 minute "clinical version" of the film is being piloted in New York which will highlight the benefits of therapy and clinical support. Most of the footage for this pilot version comes from a retreat that Dr. Robert Naseef facilitated for 14 fathers.

Charles Jones says on his website that this film "examines the difficult emotional journey experienced by fathers of autistic children. Having an autistic child turns a parent's world upside down. Dreams are broken and lives are changed forever. Men are especially affected because we often do not seek out the support network needed to deal with this type of emotional upheaval."

Here is the trailer for the documentary called Autistic Like Me.


The complete film is expected to be released in early 2012 and will share an inclusive look at fathers dealing with autism. The official website of the film is at www.autisticlikeme.net. The following is a video of Charles Jones explaining what inspired him to make the documentary Autistic Like Me.


Awareness Campaign: Charles Jones is not content to merely make a documentary that will be successful for its excellent workmanship, popularity, and inspirational message.  Autistic Like Me is the centerpiece for an awareness and advocacy campaign "that reaches young people, under-served communities and general audiences where services and understanding of autism are limited, or nonexistent (Source: Autistic Like Me Fact Sheet)." The project has a partnership with Bronx-Lebanon Hospital and it is fiscally sponsored by the Bronx Lebanon Integrated Services System, Inc., a 501c3 organization.  All tax-deductible donations should be made out to BLISS Inc. and ALM Production should be written in the memo line. They may be sent to Autistic Like Me LLC, 209 E. 56th St. Apt. 8H, New York, NY 10022.

Other Work: Here are some other projects that Charles Jones has experience with.
Social Media: You can follow Charles Jones' work at the following social media areas.

Other Articles: The following other featured articles have been written on Charles Jones.
Special thanks to Charles Jones for being an Autism Light and making a documentary on autism awareness from the perspective of fathers. We look forward to seeing this film and learning much from it. If you liked this post you may like to view all the Autism Lights with the label Father.


Photo: The photo in this post was used with permission of Charles Jones.
Posted by Alan Stokes at 12:02 AM