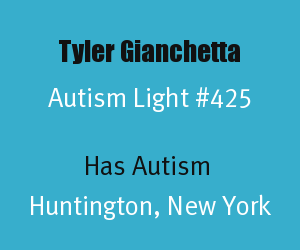 Tyler Gianchetta is an 18 year old who has autism from Huntington, New York. He is currently an honor's college student at Clark University in Worcester, Massachusetts. Tyler Gianchetta is an Autism Light because he pulled his unresponsive mother from a burning car in Long Island, New York on July 15, 2015 and saved her life.

Susan Gianchetta blacked out while driving in West Hills, New York on July 15, 2015. The car she was driving then hit a tree. Her son Tyler was riding in the passenger side and he broke his hand but managed to pull his mother out of the vehicle to safety just a minute before flames engulfed the car. The following is a news story about Tyler rescuing his mother.

Tyler has said this about the incident: "I say don't call me a hero, I'm not a hero yet until I know she's OK (Autistic Son Saves Mother from Burning Car on Long Island, CBS New York, July 16, 2015)."

Still Tyler's dad Michael Gianchetta is certain his wife wouldn't have survived the accident without the quick thinking of his son. Michael Gianchetta said, "He's [Tyler] a hero and he is a special kid (Autistic Son Saves Mother from Burning Car on Long Island, CBS New York, July 16, 2015)."

You can read more information on Tyler Gianchetta's rescue of his mother in these online stories.

Special thanks to Tyler Gianchetta for being an Autism Light. His quick thinking in the midst of an emergency where his own hand was broken saved his mother's life. Tyler Gianchetta is representative of the many people with autism who are everyday heroes as they live their lives in tune to how they can help others.

Autism Light honors diverse heroes to the world of autism.
Posted by Alan Stokes at 10:03 PM