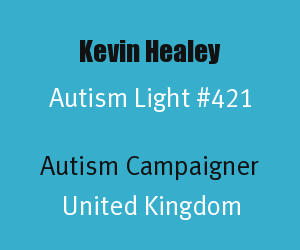 Kevin Healey is an Autism Campaigner from Stoke on trent in the United Kingdom. Kevin is 41 and was born on May 27, 1974. Kevin was diagnosed with autism in 2001. His twin brother Shaun also has autism but a more severe form. Kevin's personal experiences of having autism and being bullied have driven him to campaign against bullying. Kevin Healey is an Autism Light for the difference he is making in the lives of people with autism and how he is continually raising autism awareness through his writing, speaking, social media, leadership, and campaigning against bullying.

Anti-Bullying Campaigner: Kevin Healey raises awareness for cyberbullying and online harassment of people with autism. He is also trying to change hate crime laws in the United Kingdom and around the world in order to make it more difficult for anyone to get away with bullying people with autism. You can find out more about his Global Anti-Bullying campaign at the website www.autism-campaign.co.uk.

The following is a video where Kevin Healey talks about his anti-bullying campaign.


Author: Kevin Healey's autobiography is the 2008 book Twin Brothers World's Apart. He donates proceeds from the book to charity. Kevin's twin brother Shaun is more severely impacted by his autism than Kevin. You can order the book from Amazon/UK and the website for information on this book is at www.twinbrothersworldsapart.com.

Straffordshire Adults Autistic Society: Kevin Healey founded the Straffordshire Adults Autistic Society (SAAS) in 2007. They were the winner of the Queen's Award Charity in 2011. The SAAS is the largest adult autism charity in the United Kingdom. They say, "Our aim is to provide support to individuals on the autism spectrum, and to spread awareness and promote a better understanding of Autism and Asperger's (SAAS Blog)." Learn more about their work at the website www.saas.uk.com or their blog at www.autismblog.org.uk.

Other Award: Kevin Healey was awarded by his community the Stoke on Trent Citizen of the Year in 2006.

The following is a video that Kevin Healey did for World Autism Awareness Week in 2015.


Wikipedia: You can read more about Kevin Healey on his Wikipedia Page.

Social Media: Kevin Healey has been dedicated to getting his message out on social media for almost 15 years. You can follow Kevin and his autism campaigning on the following social media areas.
Special thanks to Kevin Healey for being an Autism Light and using his leadership skills to shine a practical light for autism in his homeland while maintaining a global mindset in his efforts. Kevin Healey's campaigning is an inspiration to the autism community around the world. It is hoped that Kevin Healey's example will inspire many others with high functioning autism to speak up for those who might not be able to speak.

Photos: The photos in this post were used with permission of Kevin Healey.
Posted by Alan Stokes at 10:36 PM