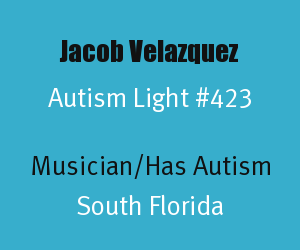 Jacob Velazquez is 7 years old and has autism. He was born on September 27, 2007 to Willie and Tina Velazquez. Jacob lives in South Florida and has been playing music on the piano since 2011, just before he turned 4. He is considered a piano prodigy with a photographic memory and has been respectfully called "Baby Beethoven", "Little Beethoven" and "Mini Mozart". Jacob Velazquez is an Autism Light for the way in which his talent in playing the piano can entertain others and give hope to others with autism as it spotlights the special gifts that some people with autism have.

Awards: When Jacob was four years old he won the double platinum trophy at a Stage Masters competition in Miami. Jacob was admitted to the prestigious National Musicians Guild by playing ten classical music pieces from memory.

The following is a video of Jacob Velazquez appearing on an Extraordinary Kids segment of the Steve Harvey show.


In the above video Jacob's mother, Tina, said on the Steve Harvey show, "I believe all children have gifts--with and without autism--it's just up to us to help discover them."

Tina Velazquez described Jacob's development as a musician at age 4 like this.


As he got older his behavior grew even more challenging but I also became even more aware of Jacob's capabilities. One day, shortly after his fourth birthday I heard the song playing from our family piano that my husband was playing the night before...but my husband was at work. I went to look to see who it was and to my surprise it was Jacob! I couldn't believe my eyes! It took us a while but we finally found a piano teacher that would take a 4 year old. His teacher soon became aware of his gift as he was flying through books learning 2-3 songs per week. It was so amazing to watch him. My son whom could never sit still could focus so intently on learning his songs on the piano. It seemed to be an outlet for him, helping him to express his feelings and emotions (Tina Velazquez via Autism Speaks Blog).

Hobbies: Jacob is a huge fan of Taylor Swift and even created a "Taylor" character on his wii just in case she ever comes over to play with him.

Album: Jacob is currently working on what will be his first album. He presently has two singles available for download on his iTunes page. You can also watch his first music video on YouTube based on one of the singles.

Social Media: You can follow Jacob on the following social media areas.

If you want to find out more about Jacob Velazquez visit his official website at www.jacobvelazquez.com.

Special thanks to Jacob Velazquez for inspiring the autism community with your accomplishments and entertaining the world with your talent. We hope that your story will encourage others with autism to play piano no matter what their skill level might be. We expect to be hearing much more about Jacob Velazquez in the years to come.

Photo: The photo in this post was used with permission of Tina Velazquez.
Posted by Alan Stokes at 4:14 PM