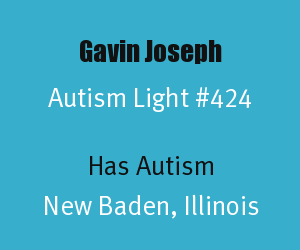 Gavin Joseph is a young man who has Asperger's and ADHD. He graduated in 2015 from Wesclin High School in New Baden, Illinois. Gavin was a victim of bullying and physical violence in late June 2015. Gavin Joseph is an Autism Light because he chose to forgive his attackers and instead of pressing charges raise autism awareness.

In late June 2015, Gavin Joseph was tricked by some boys that he thought wanted to be his friends and instead they physically assaulted him to teach him a lesson. The following is a news story on what happened to Gavin Joseph and his decision not to press charges.

Gavin's mother Cortnie Stone explained on her Facebook what happened.


Some kids were talking about how it’s weird that he’s always by himself, attending events alone and watching people, and that it was “creepy” how he wanted to be friends with people he didn’t know.

Another kid that overheard that conversation decided to take matters into his own hands and become judge and jury, and this is the result of that. He didn’t ask questions, didn’t get to know Gavin, never met him, and didn’t give him a chance to leave.

He was called to meet someone, surrounded by people he didn’t know, choked, punched, and left laying on the pavement so he would ‘learn his lesson’.

Gavin is fine. He has mild concussion, a bruised oesophagus, the tip of his nose fractured, and hematoma in his eye, but nothing permanent.

He did not press charges, but requested their community service be disability related, that they write a paper on Asperger’s, and that they watch a 20 min video statement he taped while their families were present so they could see the damage they did and hear the event from his perspective (The Independent, July 6, 2015).

Gavin Joseph makes history at Autism Light as the subject of the 100th post featured on the blog about someone with autism. Links to the other related posts are referenced on the "Has Autism" page at Autism Light.

Special thanks to Gavin Joseph for being an Autism Light and showing forgiveness toward those that wronged him. In doing so Gavin has not only raised awareness of bullying and autism, but he has shown the true spirit of the autism community as reflected in the desire to improve the world one person at a time. We wish Gavin Joseph all the best in his life.

Autism Light honors diverse heroes to the world of autism.
Posted by Alan Stokes at 7:07 PM