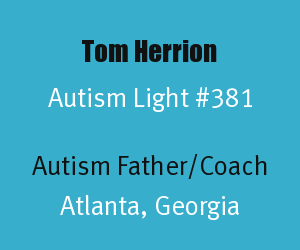 Tom Herrion is the Assistant Coach of the men's basketball team at Georgia Tech. He was born on November 13, 1967. Tom Herrion is also an Autism Father. His 9 year old son Robert has autism. Tom Herrion is an Autism Light for his willingness to use his role as an autism father and an assistant coach of a Division I NCAA basketball program to spread autism awareness.

Basketball Career: Tom Herrion played basketball in college for Merrimack College from 1985-1986. Tom Herrion was hired by Georgia Tech Coach Brian Gregory to be his assistant coach on September 18, 2014. He has 147 career wins as a head coach at College of Charleston and Marshall University. Follow the future success of his team at the Georgia Tech Men's Basketball Page.

Coaches Powering Forward for Autism: Tom Herrion and Pat Skerry started the Coaches Powering Forward for Autism campaign in 2014. Both coach Herrion and Skerry have sons with autism. In 2014 they presented their fellow coaches across the NCAA with the request to wear the Autism Speaks blue puzzle piece during televised games the first weekend of February. In its first year (2014), "More than 82 NCAA coaches and broadcasters took to the sidelines and airwaves throughout the weekend wearing the pin (Autism Speaks Press Release, January 15, 2015)."

Coaches Powering Forward for Autism partners with Autism Speaks and funds raised benefit the work of Autism Speaks. The campaign was in place in 2015 for the televised games on the weekend of February 6-8, 2015. The Coaches Powering Forward for Autism fundraising page lists the coaching leaders in this autism awareness campaign in 2015. The top 3 coaches in 2015 in fundraising for autism as of March 23, 2015 are:
Both Duke and Notre Dame have teams that are experiencing success on the court in the 2015 NCAA Final Four Tournament as well.

Duke coach Mike Krzyzewski said, "There's so many good things that have happened for these youngsters, and so to help in some way is an easy thing to do. And Tom's a great guy, and so we'll participate in that, definitely, and feel proud and honored to do it  (Atlanta Constitution, February 5, 2015).

Here is a video of Tom Herrion giving a speech at an Autism Speaks event.


Other Information: You can read more about Tom Herrion and his work with autism in these online news stories:
Wikipedia: The Wikipedia Page for Tom Herrion has more information on his life and coaching career statistics.

Special thanks to Tom Herrion for spreading autism awareness. His leadership in Coaches Powering Forward for Autism has indeed had an impact around the United States. We wish Tom Herrion all the best in the future as an autism father, coach, and autism advocate.

Autism Light honors diverse heroes to the world of autism.
Posted by Alan Stokes at 9:09 PM