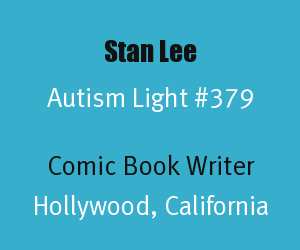 Stan Lee lives in Hollywood, California and is an American comic book writer, editor, publisher, actor, and former president of Marvel Comics. Stan Lee co-created many of the famous comic book characters such as Spider-Man, the Hulk, the Fantastic Four, Iron Man, Thor, and the X-Men. He was born on December 28, 1922. Stan Lee is an Autism Light because he drew Spider-Man for a birthday present for an 8 year old fan with autism named Jamel Hunter.

Jazz musician Corky Hale, who is a neighbor of Stan Lee, heard about the love Jamel Hunter has for Spider-Man. She asked Lee to do a drawing of Spider-Man for Jamel.  Lee agreed and the sketch was signed and sent to New York Times writer Michael Wilson to personally deliver to Jamel Hunter. The account of that heartwarming gift being presented was featured in an article Michael Wilson wrote on February 20, 2015 in the New York Times.

Stan Lee told the New York Times that he wrote the Spider-Man comics, but did not draw the characters. "This was a unique experience. I'm not known as an artist, which is lucky for the world (CBS News, February 24, 2015)."

Wikipedia: The Wikipedia Page for Stan Lee has more information on his life.

Social Media: You can follow Stan Lee (AKA The Real Stan Lee) on the following social media areas.

Special thanks to Stan Lee for the personal attention he gave to make a special present for a boy with autism. This act of kindness is an example to others of how it is possible to make dreams come true for people with autism when one truly cares.

Photo: The photo of Stan Lee is from the Wikipedia Commons and was taken by Edward Liu.
Posted by Alan Stokes at 7:47 PM