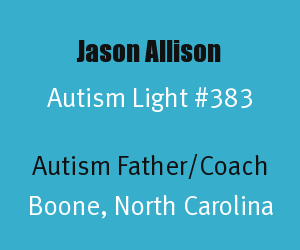 Here is a video about the journey of Jason Allison's family in the world of autism that was used by the Appalachian State Men's Basketball program to promote their Autism Awareness Game against Troy on February 7, 2015.

Jason Allison described part of the autism awareness that arises from the Coaches Powering Forward for Autism campaign that doesn't involve the fundraising. "We wear pins on our suits and it catches people's attention. It's something the rest of America has the opportunity to look at, ask questions, research and learn about. It is one of the better ways that we can draw attention to this on going process (As Quoted by Kayla May, The Appalachian, February 10, 2015)."

Building Autism Awareness for College Students:  Jason Allison said, "[Autism affects] one in 68 children now and the number is increasing. The student body will come in contact with autism at some point in their life, whether it's a family member or their own children. If it's something they can learn about now they can be aware of it. It won't hit them blind like it did me and my wife (As Quoted by Kayla May, The Appalachian, February 10, 2015)."

Social Media:  You can follow Jason Allison on Twitter@JAllison10.


'Autism Awareness in College Hoops' is this weekend. Thx to @CoachPatSkerry for bringing attention to it. My boys! pic.twitter.com/HMl47NpjYU — Jason Allison (@JAllison10) January 31, 2014

Special thanks to Jason Allison for being an Autism Light. His dedication as a father of two boys with autism is an example to other fathers. The way in which he uses his position as an assistant coach to raise autism awareness is a light for the autism community. We wish Jason Allison continued success as an autism father and coach.

Autism Light honors diverse heroes to the world of autism.
Posted by Alan Stokes at 6:55 PM